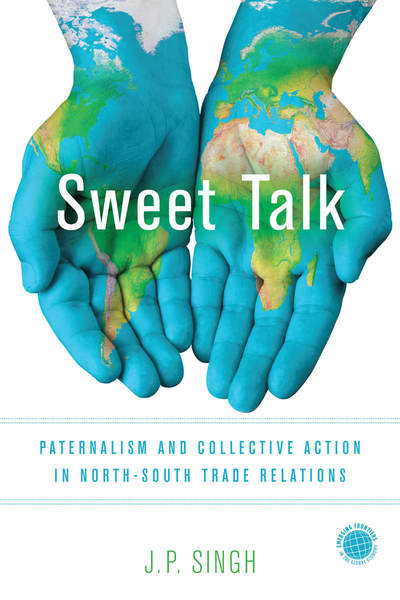 Developed nations strive to create the impression that their hearts and pockets bleed for the developing world. Yet, the global North continues to offer unfavorable trade terms to the global South. Truly fair trade would make reciprocal concessions to developing countries while allowing them to better their own positions. However, five hundred years of colonial racism and post-colonial paternalism have undermined trade negotiations.

While urging developing countries to participate in trade, the North offers empty deals to "partners" that it regards as unequal. Using a mixed-methods approach, J. P. Singh exposes the actual position beneath the North's image of benevolence and empathy: either join in the type of trade that developed countries offer, or be cast aside as obstreperous and unwilling. Singh reveals how the global North ultimately bars developing nations from flourishing. His findings chart a path forward, showing that developing nations can garner favorable concessions by drawing on unique strengths and through collective advocacy. Sweet Talk offers a provocative rethinking of how far our international relations have come and how far we still have to go.

J.P. Singh is Chair and Professor of Culture and Political Economy and Director of the Centre for Cultural Relations at the University of Edinburgh. Singh is the author of seven books and Series Editor of Emerging Frontiers in the Global Economy.

"Singh offers a fascinating explanation for the Global North's failure to offer reciprocal trade concessions to the developing world. Trade negotiations have been imbued with deeply paternalistic, and sometimes racist discourse masquerading as 'fairness.' This riveting analysis shows the pernicious effects that culture clashes can have on the wellbeing of billions."

"In this provocative new book, J.P. Singh offers a powerful critique of the rules that govern trade, shedding light on neocolonial values that underlie our negotiations and the unequal outcomes that result. Drawing on U.S. government press releases and detailed case studies, this compelling book urges scholars and practitioners to reexamine how cultural beliefs and historical patterns shape interactions among countries."

"J.P. Singh's blockbuster offers fresh insight into international trade negotiations where those in the developing world--who do not stand up for themselves, eyes open--are sweetly taken to the cleaners. A penetrating, sobering, skillful, alerting work."

—I. William Zartman, Johns Hopkins University, co-author of The Global Power of Talk

"Singh skillfully navigates different types of empirical evidence and presents a wealth of data and analysis...This book provides a foundation for future scholarship on paternalism and injustice in IPE, as well as the patterns of sweet and not so sweet talk in the North–South trade relations these dynamics create—making it a valuable read not only for scholars interested in trade, but also in North–South relations."

"The general conclusion [of the book] is that while the Global North talks about benevolence toward the Global South, it gives few concessions and expects a lot from the Global South. In addition to notes and references, there are two appendixes on the node classification system used and the code book and data sources. This book provides another perspective on the international trade system and negotiations. Recommended. Upper-division undergraduates through faculty."

"Sweet Talk is a sweeping and ambitious work. It provides a valuable map and hypothesis for understanding the contours of international trade negotiations and outcomes over the past several decades. It will exert an important influence on scholarly understandings of trade and race in international relations."

Cultural Relations and their Effects on Politics and Economics