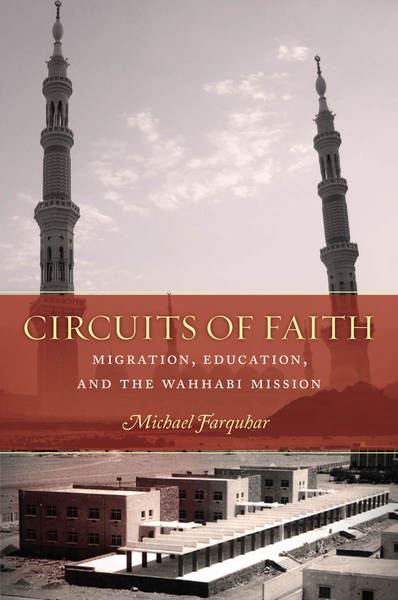 The Islamic University of Medina was established by the Saudi state in 1961 to provide religious instruction primarily to foreign students. Students would come to Medina for religious education and were then expected to act as missionaries, promoting an understanding of Islam in line with the core tenets of Wahhabism. By the early 2000s, more than 11,000 young men from across the globe had graduated from the Islamic University.

Circuits of Faith offers the first examination of the Islamic University and considers the efforts undertaken by Saudi actors and institutions to exert religious influence far beyond the kingdom's borders. Michael Farquhar draws on Arabic sources, including biographical materials, memoirs, syllabi, and back issues of the Islamic University journal, as well as interviews with former staff and students, to explore the institution's history and faculty, the content and style of instruction, and the trajectories and experiences of its students. Countering typical assumptions, Farquhar argues that the project undertaken through the Islamic University amounts to something more complex than just the one-way "export" of Wahhabism. Through transnational networks of students and faculty, this Saudi state-funded religious mission also relies upon, and has in turn been influenced by, far-reaching circulations of persons and ideas.

"Nowhere have I read a more lucid, accessible, and well-researched book on education, migration, and the Wahhabi mission. Circuits of Faith complicates our conventional wisdom with new interpretations and perspectives. Both critics and sympathizers with Wahhabiyya will find their stereotypes challenged."

"Circuits of Faith is the definitive work on the Saudi-backed expansion of Salafi-Wahhabism in the twentieth and twenty-first centuries. With great subtlety and intelligence, Michael Farquhar explores how Saudi state interests, material capital, and institutional logics inform and harness a growing trans-local religious economy. A rich and impressive book."

—John Chalcraft, The London School of Economics and Political Science

"Michael Farquhar presents a must-read study of a critical Saudi institution and the role it plays in exporting the Wahhabi message. Thoroughly researched and analytically acute, this book incisively unpacks larger issues of religious dissemination and its links to wealth and authority, as well as the understudied but defining influence of religious intellectuals and changing social technologies."

"Michael Farquhar expertly traces the Saudi state's use of the Islamic University of Medina (IUM) to facilitate state-driven dawa, or proselytization, which he dubs 'fundamentally a political project' (p.9). While other writers, particularly those in the Western media, have tended toward the use of alarmist rhetoric about the systematic and targeted spread of Wahhabism by the Saudi government, Farquhar comprehensively details the history of the IUM and of the state's nuanced relationship with its mission of dawa...Farquhar's conclusion is an important contribution, both in terms of its academic and policy consequences."

"Overall, this is an outstanding, engaging and very clearly argued work that goes a long way in putting the study of transnational Islam on a sophisticated theoretical footing. Farquhar does not neglect the important issue of power but manages to show that even a missionary project as lavishly funded as the IUM faces real limits to its global influence and is in no position simply to dictate a hegemonic discourse. The book's accessible style should make it attractive for students and specialists alike."

—Simon Wolfgang Fuchs, Bulletin of the School for African and Oriental Studies

"Circuits of Faith expands the horizon of scholarship on Wahhabism, which often remains bounded by the nation-state in scopeIn the process of posing the question of Wahhabism's material conditions, Farquhar transforms the possible answers that might be given. Instead of asking what Wahhabism is, he focuses his analysis on the intellectual relations that compose Wahhabism as a discursive practice (by no means singular or unified in its approach) and the material migrations that make possible its spread. This focus on actors, networks, institutions, and the forms of interaction that connect them allows for more nuanced engagement with such a complex historical phenomenon. In this way, Michael Farquhar's Circuits of Faith is a most welcome contribution to the field."

"Michael Farquhar has done an excellent job researching and writing this book. Its highly diverse sources—ranging from university curricula and information about salaries to books about theology—make this a great contribution to the literature on Saudi Arabia. It fills a gap in our understanding of the dissemination of Wahhabism and nicely complements the great work already done by scholars such as Madawi al-Rasheed."

"Circuits of Faith speaks both to a more nuanced definition of Saudi Arabia's political economy, that incorporates religious and spiritual forms of capital, as well as providing a meaningful history of education in Saudi Arabia. This book would be of interest to those seeking to learn more about Wahhabi Salafism, the transnational role of spiritual capital, or Saudi educational history. Overall, this book is a pleasurable and engaging read that helpfully weaves background concepts and theories into the history of the IUM without taking the reader out of the narrative of the book."

The Mission of Medina