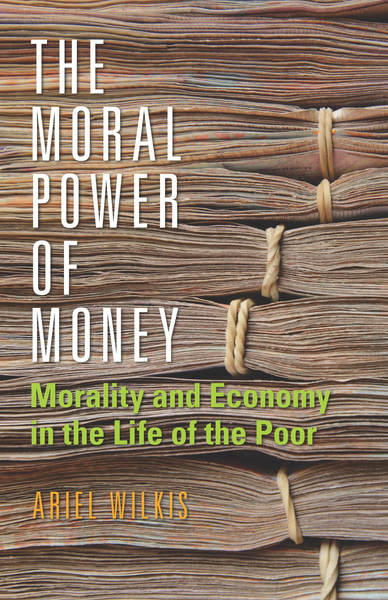 The Moral Power of Money
Morality and Economy in the Life of the Poor
Ariel Wilkis
SERIES: Culture and Economic Life

Looking beneath the surface of seemingly ordinary social interactions, The Moral Power of Money investigates the forces of power and morality at play, particularly among the poor. Drawing on fieldwork in a slum of Buenos Aires, Ariel Wilkis argues that money is a critical symbol used to negotiate not only material possessions, but also the political, economic, class, gender, and generational bonds between people.

Through vivid accounts of the stark realities of life in Villa Olimpia, Wilkis highlights the interplay of money, morality, and power. Drawing out the theoretical implications of these stories, he proposes a new concept of moral capital based on different kinds, or "pieces," of money. Each chapter covers a different "piece"—money earned from the informal and illegal economies, money lent through family and market relations, money donated with conditional cash transfers, political money that binds politicians and their supporters, sacrificed money offered to the church, and safeguarded money used to support people facing hardships. This book builds an original theory of the moral sociology of money, providing the tools for understanding the role money plays in social life today.

Ariel Wilkis is a researcher at the National Council of Scientific and Technological Research (CONICET) and Co-Director of the Center for Social Studies of Economics at the National University of San Martín, Argentina.

"Wilkis set out to study the power and politics in greater Buenos Aires, but what he discovered was money: money's morality, variegation, and fragmentation. This remarkable ethnography opens a window into everyday popular politics and solidarities, offering lessons beyond the case of Argentina and into people's moneyworlds and moral orders more broadly."

—Bill Maurer, author of How Would You Like To Pay? How Technology is Changing the Future of Money

"Thanks to Ariel Wilkis for bringing compelling insight into our understanding of how money really works. Gracefully blending theoretical analysis with fascinating ethnographic observation, The Moral Power of Money makes a stellar contribution to economic and cultural sociology. A book that will inspire researchers and fascinate general readers."

—Viviana A. Zelizer, Lloyd Cotsen '50 Professor of Sociology at Princeton University, author of The Social Meaning of Money and Economic Lives

"Ariel Wilkis offers a richly detailed ethnographic exploration of all the different and co-existing ethical frames within which money is judged by the poor, and on 'how money connects them.' We hear many people's own moral language, in their own life situations. These accounts will provoke yet further research in many other places, and Wilkis's approach will become exemplary."

"The primary material makes the book an engaging read. One of the effects of looking at the various pieces of money important to villeros is that it gives us a better understanding of how interdependent they are in real life, and how individuals and families strategize. The attention to family is welcome and helps highlight relations of cooperation, power, and hierarchy on the ground; not just between poor communities and the larger society, but also within these homes and communities....The book will be of interest in the fields of international development, sociology, and anthropology....The book will be of interest to scholars of Argentina, money, the urban poor, and grass roots politics. It is suitable both for graduate and advanced undergraduate courses."

What inspired my research approach? Recommended reads from our academics

LSE Research for the World
Recommended