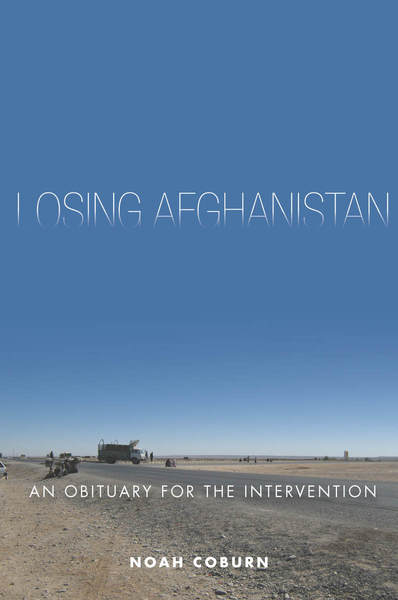 Losing Afghanistan
An Obituary for the Intervention
Noah Coburn

The U.S.-led intervention in Afghanistan mobilized troops, funds, and people on an international level not seen since World War II. Hundreds of thousands of individuals and tens of billions of dollars flowed into the country. But what was gained for Afghanistan—or for the international community that footed the bill? Why did development money not lead to more development? Why did a military presence make things more dangerous?

Through the stories of four individuals—an ambassador, a Navy SEAL, a young Afghan businessman, and a wind energy engineer—Noah Coburn weaves a vivid account of the challenges and contradictions of life during the intervention. Looking particularly at the communities around Bagram Airbase, this ethnography considers how Afghans viewed and attempted to use the intervention and how those at the base tried to understand the communities around them. These compelling stories step outside the tired paradigms of 'unruly' Afghan tribes, an effective Taliban resistance, and a corrupt Karzai government to show how the intervention became an entity unto itself, one doomed to collapse under the weight of its own bureaucracy and contradictory intentions.

Noah Coburn is Professor of Anthropology at Bennington College. He is the author of Bazaar Politics: Power and Pottery in an Afghan Market Town (Stanford, 2011) and Derailing Democracy in Afghanistan: Elections in an Unstable Political Landscape (2014) with Anna Larson. He has been conducting ethnographic research in Afghanistan since 2005, as well as working for the United States Institute of Peace, Chatham House and the Afghan Research and Evaluation Unit and as an election observer.

"Coburn's experienced eye demonstrates that understanding local culture is a two way street. Highly recommended for Afghans, or anyone puzzled by the policies of international military and civilian institutions and in need of practical advice on how to cope with their strange ways of thinking."

"Rich in description and thick with ironies, Losing Afghanistan reveals the insanities of a war run by and for contractors, and by soldiers posing as development agents. In this first-hand account of war-time Afghanistan, Coburn navigates the various and sometimes shared assumptions of walled off foreigners and the world they created in which Afghans play but minor parts. A quiet indictment."

"Though it receives little regard in the conference rooms where policy decisions are arrived at, anthropology in the person of field ethnographers like Noah Coburn provides a much-needed perspective that is almost always ignored or only turned to after the fact. In its careful attention to pinpointing the places where abstract policy gets stuck in practice, Losing Afghanistan demonstrates why anthropology is desperately needed as both counsel and corrective, and why its small-scale but critical truths are so often ignored."

"Coburn convincingly shows that any anthropological understanding of the international intervention in Afghanistan needs to describe the specific subculture of the foreign military, humanitarian workers, consultants, or journalists who flocked into the country in the aftermath of the Taliban regime's fall....Coburn's compelling book is a must-read for everybody interested in Afghanistan and more generally in peacebuilding interventions."