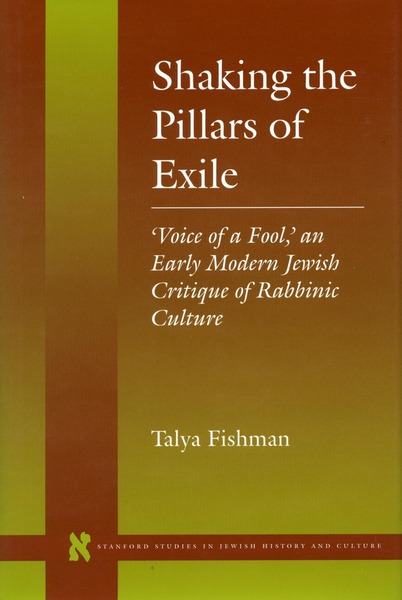 This book explores a heretical blueprint for Jewish modernization written by a Venetian rabbi (under cover of pseudonym) in the early seventeenth century, almost two centuries before political emancipation. The analysis of this text, Kol Sakhal ("Voice of a Fool"), highlights the ways in which it harnessed concepts and methods drawn from the texts of rabbinic Judaism itself in order to reform Jewish culture from within. This book thus challenges the assumption that pre-modern Jewish society was culturally monolithic and unquestioningly obedient to rabbinic authority. In so doing, it raises fresh and unsettling questions about the periodization of Jewish history.

Like the contemporaneous political and religious struggle that the Republic of Venice was waging against papal Rome, this remarkable Jewish attack on rabbinic authority targets—and revises—both the traditional historiography of sacred institutions and the legal canon itself. The text's very iconoclasm is shown to derive from the corpus of rabbinic Judaism, for the preservation of certain strains of inquiry in traditional sources makes them a virtual repository of tolerated dissent.

Conjecture about the possible influence that a recently discovered work by a heretical Iberian Jewish convert to Catholicism may have had on the composition of "Voice of a Fool" leads to a discussion of the types of heterodoxy that threatened rabbinic Jewish communities in Italy and elsewhere in the early modern period. Reflections on the significance of the mask adopted by the text's author and on his (false) claim that the work was composed in 1500 in Spain facilitate speculation about his motives in trying to reinvent history.

The second half of the book presents the first annotated English translation of "Voice of a Fool." Three appendixes analyze evidence concerning the date and place of the text's composition, the identification of its author, and its various manuscripts.

Talya Fishman is Associate Professor of History at Rice University.

"The subject of this book is important and exciting for both Jewish history and general European history, and Fishman's analysis of this remarkable but enigmatic Hebrew text is exceedingly learned, imaginative, and convincing. She opens a fascinating window onto the complexity of early modern Jewish culture in an outstanding and accessible work of scholarship of enduring importance to students of religious and political history."

—David B. Ruderman, University of Pennsylvania

"This is a provocative, well-written and enjoyable study of great value both to Jewish and to Italian history . . . .Fishman's patient and careful translation of the 'Voice of the Fool' renders a great service by making this important document accessible."