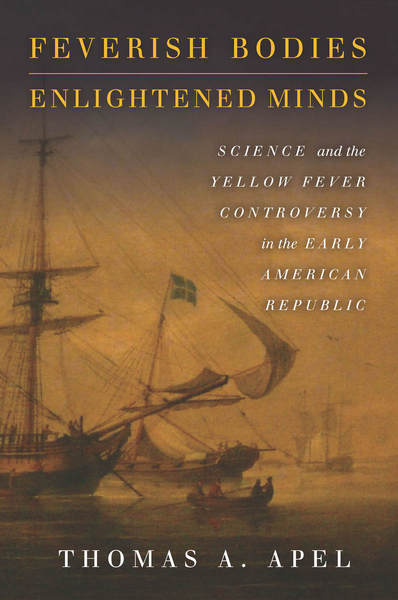 From 1793 to 1805, yellow fever devastated U.S. port cities in a series of terrifying epidemics. The search for the cause and prevention of the disease involved many prominent American intellectuals, including Noah Webster and Benjamin Rush. This investigation produced one of the most substantial and innovative outpourings of scientific thought in early American history. But it also led to a heated and divisive debate—both political and theological—around the place of science in American society.

Feverish Bodies, Enlightened Minds opens an important window onto the conduct of scientific inquiry in the early American republic. The debate between "contagionists," who thought the disease was imported, and "localists," who thought it came from domestic sources, reflected contemporary beliefs about God and creation, the capacities of the human mind, and even the appropriate direction of the new nation. Through this thoughtful investigation of the yellow fever epidemic and engaging examination of natural science in early America, Thomas Apel demonstrates that the scientific imaginations of early republicans were far broader than historians have realized: in order to understand their science, we must understand their ideas about God.

"An accomplished and concise book, it commands attention from the outset by reminding us of the importance of yellow fever in early US cities and clearly differs from previous books on the topic by uncovering the deeper set of intellectual commitments at work in the debate about the origins of the disease."

"While competing explanations for the yellow fever epidemics that swept the northeast are the primary subject, Apel persuasively shows how these understandings of disease were infused with theological and political assumptions. Lively and jargon-free, his book should find a wide readership among historians of medicine and of the Early Republic."

"Apel delivers a panoramic view of the significance of the yellow fever controversy. The disease struck as an event in biological history, in which a virus and a mosquito were the principal actors. But its interpretation was a human affair, deeply embedded in society and culture. Apel has shown how the outbreaks on the eastern seaboard in the 1790s were understood in ways that reflected the political polarization of the era and its peculiar melding of scientific and religious thought. His prose is vivid and clear, and his discursive footnotes open up many possible directions for future inquiry. Readers will appreciate his contribution to solving the problem that vexed commentators at the time of the outbreaks themselves: that of interpreting a devastating series of epidemics as historical events with profound implications for human self-understanding."

"Feverish Bodies, Enlightened Minds is an excellent contribution to the history of science, ideas, medicine, and politics in the early American republic. I recommend it highly to students of all of these fields."

—Rebecca J. Tannenbaum, Isis: A Journal of the History of Science Society

"In this new monograph, Thomas A. Apel provides a compelling examination of the intellectual controversy surrounding outbreaks of yellow fever in the northeastern United States at the turn of the nineteenth century...Apel's work represents a welcomed addition to our knowledge of the yellow fever controversy. Even more profound, Feverish Bodies, Enlightened Minds provides an open window into the intellectual concerns of the United States' governing classes at the turn of the nineteenth century, exploring the political, religious, and naturalistic anxieties that plagued early Republican intellectuals."

—Christopher Willoughby, Journal of the History of Medicine and Allied Sciences

"Thomas Apel's Feverish Bodies, Enlightened Minds: Science and the Yellow Fever Controversy in the Early American Republic undertakes an epistemological approach to the question of health knowledge in the early Americas. It is a beautifully written book about the series of yellow fever outbreaks between 1793 and 1805....Apel's book makes an important contribution that will be welcomed by scholars looking to write about the outbreaks."

"Feverish Bodies is valuable for bringing North American perspectives on yellow fever into conversation with theology, chemistry, and medicine."

—Michael A. Osborne, Science and Education