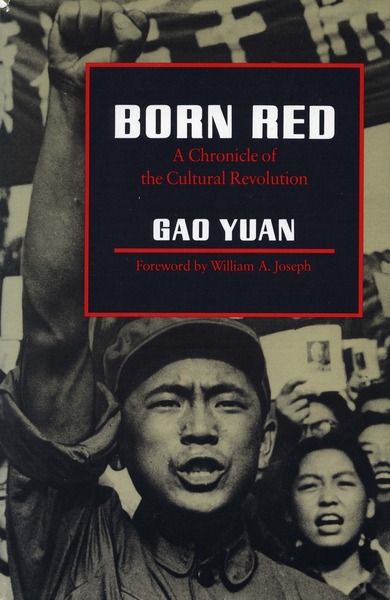 Born Red
A Chronicle of the Cultural Revolution
Gao Yuan Foreword by William A. Joseph

Born Red is an artistically wrought personal account, written very much from inside the experience, of the years 1966-1969, when the author was a young teenager at middle school. It was in the middle schools that much of the fury of the Cultural Revolution and Red Guard movement was spent, and Gao was caught up in very dramatic events, which he recounts as he understood them at the time. Gao's father was a county political official who was in and out of trouble during those years, and the intense interplay between father and son and the differing perceptions and impact of the Cultural Revolution for the two generations provide both an unusual perspective and some extraordinary moving moments. He also makes deft use of traditional mythology and proverbial wisdom to link, sometimes ironically, past and present. Gao relates in vivid fashion how students-turned-Red Guards held mass rallies against 'capitalist roader' teachers and administrators, marching them through the streets to the accompaniment of chants and jeers and driving some of them to suicide. Eventually the students divided into two factions, and school and town became armed camps. Gao tells of the exhilaration that he and his comrades experienced at their initial victories, of their deepening disillusionment as they utter defeat as the tumultuous first phase of the Cultural Revolution came to a close. The portraits of the persons to whom Gao introduces us - classmates, teachers, family members - gain weight and density as the story unfolds, so that in the end we see how they all became victims of the dynamics of a mass movement out of control.

"In Born Red, Gao Youan, a former Red Guard . . . tells us what it was like to be one of Mao's children in a provincial town four hours by train south of Peking. It is a terrible story, demonstrating that Mao and his crazed coterie were able to cripplee Chinese society for ten years, as well as cause the deaths of hundreds of thousands of people, because they had plenty of help from the masses."

"Gao's moving account, which is surprisingly even-handed, viividly captures the pervasive sense of fear and uncertainty that washed over China during the tumultuous period from 1966–1969."

"The most detailed account of those difficult years I have read . . . Incredible as the events may seem, they are believable."

"Although many memoirs of the Cultural Revolution have been published in recent years, Born Red stands out for the immediacy of its portrait of the Red Guards. Without ever abandoning the voice of someone on the edge of childhood, Gao Yuan creates a nuanced and complex picture of the lives of his peers . . . Gao's narrative is powerful, compelling, and deeply disturbing."

"This latest of a number of personal accounts of the youth involved in the mid-1960s Chinese Cultural Revolution is in many ways the most useful and credible."