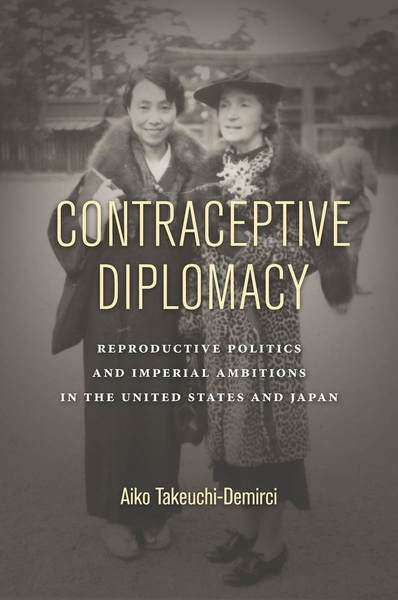 A transpacific history of clashing imperial ambitions, Contraceptive Diplomacy turns to the history of the birth control movement in the United States and Japan to interpret the struggle for hegemony in the Pacific through the lens of transnational feminism. As the birth control movement spread beyond national and racial borders, it shed its radical bearings and was pressed into the service of larger ideological debates around fertility rates and overpopulation, global competitiveness, and eugenics. By the time of the Cold War, a transnational coalition for women's sexual liberation had been handed over to imperial machinations, enabling state-sponsored population control projects that effectively disempowered women and deprived them of reproductive freedom.

In this book, Aiko Takeuchi-Demirci follows the relationship between two iconic birth control activists, Margaret Sanger in the United States and Ishimoto Shizue in Japan, as well as other intellectuals and policymakers in both countries who supported their campaigns, to make sense of the complex transnational exchanges occurring around contraception. The birth control movement facilitated U.S. expansionism, exceptionalism, and anti-communist policy and was welcomed in Japan as a hallmark of modernity. By telling the story of reproductive politics in a transnational context, Takeuchi-Demirci draws connections between birth control activism and the history of eugenics, racism, and imperialism.

Aiko Takeuchi-Demirci is a Lecturer at Stanford University.

"This fine book explores the complex and often counter-productive alliance between the birth control movement and population control/eugenics advocates in Asia, Japan in particular. Its extensive international research demonstrates how campaigns for women's right to control reproduction became skewed toward governments and organizations committed to male-dominated, even authoritarian regimes. A major addition to the scholarship."

"This path-breaking book weaves together a fascinating study of transnational feminism and international policy that yields an exciting new frontier for transnational histories. Takeuchi-Demirci decenters the story of the birth control movement from the America-centric view characteristic of American scholarship, showing how the birth and population control work of Margaret Sanger, American NGOs, and the US government depended on collaboration with Japanese and Japanese-American colleagues."

"Based on thorough research on English- and Japanese-language sources, the book gives a rich account on the transpacific US-Japan alliance for birth control promotion....Contraceptive Diplomacy will be a welcome addition to the rapidly growing historical scholarship that locates birth control advocacy in international and transnational politics."

"Contraceptive Diplomacy is a welcome addition to a recent mini-wave of works by historians and cultural studies scholars that have contributed to self-consciously transnationalizing (across the Pacific) the emergence of birth control, women's rights, and feminism."––Sabine Frühstück, Pacific Historical Review

"There is much to praise about Contraceptive Diplomacy. Takeuchi-Demirci has read deeply in several archives and her transnational perspective sheds light on connections scholars may miss when they work within national boundaries....[She] compels us to consider what a better activism might look like."

"[Contraceptive Diplomacy] succeeds in a way all historical works should seek to emulate....In taking a relatively specific topic that is perhaps infrequently given the attention it deserves, Takeuchi-Demirci offers an intriguingly complex and compelling narrative examining birth control, eugenics, racism, imperial ambition, immigration policy, and war. In doing so, she offers the reader a wealth of often new and surprising information while providing a historical narrative on birth and exclusionary policies that reads as frighteningly germane in the contemporary."