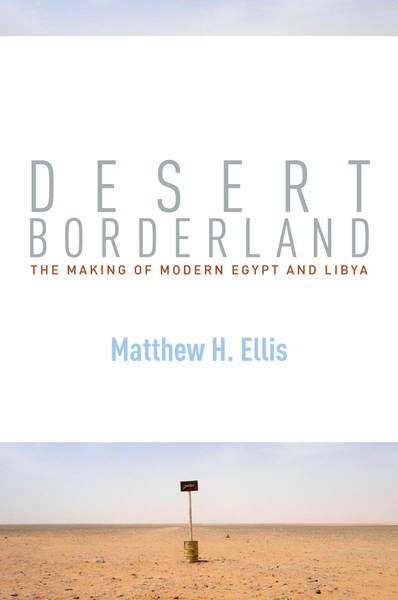 Desert Borderland investigates the historical processes that transformed political identity in the easternmost reaches of the Sahara Desert in the half century before World War I. Adopting a view from the margins—illuminating the little-known history of the Egyptian–Libyan borderland—the book challenges prevailing notions of how Egypt and Libya were constituted as modern territorial nation-states.

Matthew H. Ellis draws on a wide array of archival sources to reconstruct the multiple layers and meanings of territoriality in this desert borderland. Throughout the decades, a heightened awareness of the existence of distinctive Egyptian and Ottoman Libyan territorial spheres began to develop despite any clear-cut boundary markers or cartographic evidence. National territoriality was not simply imposed on Egypt's western—or Ottoman Libya's eastern—domains by centralizing state power. Rather, it developed only through a complex and multilayered process of negotiation with local groups motivated by their own local conceptions of space, sovereignty, and political belonging. By the early twentieth century, distinctive "Egyptian" and "Libyan" territorial domains emerged—what would ultimately become the modern nation-states of Egypt and Libya.

"Desert Borderland offers a compelling challenge to conventional wisdom. Matthew Ellis complicates common understandings of the Egyptian nation-state to show how territoriality and sovereignty are the result of accommodation and contestation among multiple players. His work will be essential to future debates in geography, the history of law, colonial history, and late Ottoman and modern Egyptian history."

—Khaled Fahmy, University of Cambridge, author of Mehmed Ali: From Ottoman Governor to Ruler of Egypt

"Desert Borderland is an engaging and original work that highlights the role of local figures and their experiences in the making of modern Egypt and Libya. With meticulous research and a rich source base in multiple languages, Matthew Ellis challenges readers to consider if there is such a thing as a normative path to state-building."

—Janet Klein, University of Akron, author of The Margins of Empire: Kurdish Militias in the Ottoman Tribal Zone

"[T]his important book fills a gap in borderland studies and in the study of the history of Egypt—not only for its perspective and conclusions but also because of the wealth of rare archival sources Ellis brings to light."

"Matthew Ellis's overarching objective in Desert Borderland is to challenge the notion that the borders of modern Egypt, and its territory as a whole, were imposed from the center of the state....Any scholar interested in the formation of modern Egypt...would benefit from reviewing Ellis's articulation of the process, which contributes a deep and nuanced level of understanding to this topic."

"This theoretically and empirically rich book is a perfect undergraduate and graduate reading in the history of modern Egypt, borderland studies, territoriality, sovereignty, and even environmentalism. It problematizes fundamental questions of modern boundary making, initiates a meaningful dialogue with nonspecialists, and offers an innovative application of American historical theories on late Ottoman North Africa."––Adam Mestyan, International Journal of Middle East Studies

"Understood to be of little value due to a certain absence of productivity, borderland spaces had no place on nineteenth-century maps. Yet, as Ellis shows us, hinterlands or borderlands are in fact of crucial value to understandings of mobility, state-inscribed methods of control, identity formation in the absence of state centralization, and in this case, the impact of internal Ottoman and Egyptian colonialism."––Lauren Banko, Mashriq and Mahjar

Egypt, Libya, and the Desert Borderlands