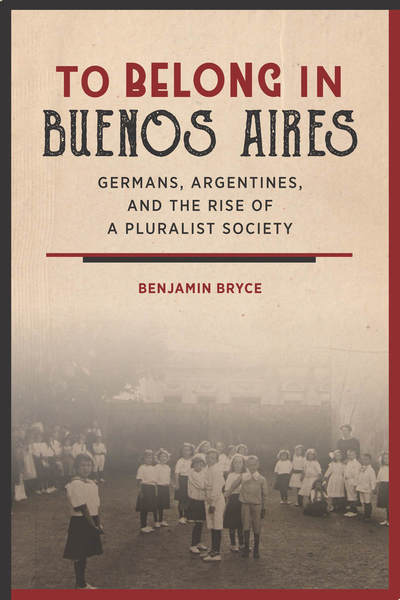 To Belong in Buenos Aires
Germans, Argentines, and the Rise of a Pluralist Society
Benjamin Bryce

In the late nineteenth and early twentieth centuries, a massive wave of immigration transformed the cultural landscape of Argentina. Alongside other immigrants to Buenos Aires, German speakers strove to carve out a place for themselves as Argentines without fully relinquishing their German language and identity. Their story sheds light on how pluralistic societies take shape and how immigrants negotiate the terms of citizenship and belonging.

Focusing on social welfare, education, religion, language, and the importance of children, Benjamin Bryce examines the formation of a distinct German-Argentine identity. Through a combination of cultural adaptation and a commitment to Protestant and Catholic religious affiliations, German speakers became stalwart Argentine citizens while maintaining connections to German culture. Even as Argentine nationalism intensified and the state called for a more culturally homogeneous citizenry, the leaders of Buenos Aires's German community advocated for a new, more pluralistic vision of Argentine citizenship by insisting that it was possible both to retain one's ethnic identity and be a good Argentine. Drawing parallels to other immigrant groups while closely analyzing the experiences of Argentines of German heritage, Bryce contributes new perspectives on the history of migration to Latin America—and on the complex interconnections between cultural pluralism and the emergence of national cultures.

Benjamin Bryce is Assistant Professor of History at the University of Northern British Columbia.

"By treating ethnicities and nationalisms together, To Belong in Buenos Aires reminds readers that identities are constructed and multiple. The stories of German-speaking Argentines are the stories of the Americas as citizenship and belonging were negotiated in the creation of a pluralistic new world. This impressive, creative, and ambitiously researched volume is sure to be widely read by students and researchers alike."

"An original contribution to the history of the German community in Argentina. Bryce deftly explores immigrant history in new ways and sheds light on a community that, while small in number, had an outsize influence on Argentine history."

"Benjamin Bryce has written an excellent book that contributes to our understanding of immigrant life in Argentina while at the same time bringing up important questions that have not been fully addressed in previous scholarship."––Mollie Lewis Nouwen, Historical Studies in Education

"To Belong in Buenos Aires is a deeply informative and differentiated account of the processes and consequences of German-speaking immigrants' contributions to the rise of a pluralist society in Argentina. The book lays a theoretical and investigative groundwork that will inform and inspire future scholarship in multiple academic disciplines, such as Latin American studies, migration studies, historiography andmore."

"Benjamin Bryce's deeply researched and well-written book To Belong in Buenos Aires reminds us that ethnic and national identities are rarely fixed or static....this author's imaginative and no doubt tireless search for documentation highlights the importance of transnational research for future works on Argentina."

"To Belong in Buenos Aires is a detailed, well-researched, and cogent study of the experience and activities of German-speaking immigrants in the Argentine capital in the late nineteenth and opening decades of the twentieth centuries.[Bryce's] book is an important read to those interested in Germans in Argentina, the integration of immigrants more generally in Argentine society during the period, and the relationship of that integration to Argentine government policy."