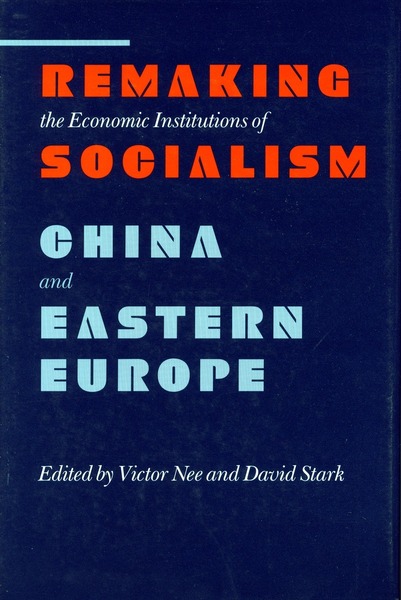 To what extent can contemporary socialist economies be reformed by the introduction of markets? The question is usually debated in either a Chinese or an East European context; this collection of eleven essays is unique in taking the first steps toward a comparative analysis.

Twenty years of experience with reforms in Hungary and a decade of experimentation with reforms in China proivde a critical mass of evidence for analyzing the problems endemic to cnetrally planned economies and the dilemmas faced in efforts to reform them. In reflecting on the Chinese and East European experiences, these essays trace the shift from a conception of reform as a mix of planning and makrets within the state sector to a socialist mixed economy with implications for the emergence of new social groups and autonomous social organizations.

The essays exemplify a new perspective in the study of state socialism that changes the focus from ideologies to economic institutions, examining how the activities of subordinate groups place limits on the power of state elites.

The authors include scholars who have shaped debates in Eastern Europe and whose work is now stimulating much discussion in China, as well as representatives of a younger generation of economists, sociologists, and political scientists writing on the basis of field research recently conducted in factories, cities, and villages in China and Eastern Europe. The contributors are: Wlodzimierz Brus, Walter D. Connor, Zhiren Lin, Victor Nee, Susan Shirk, David Stark, Ivan Szelenyi, and Martin King Whyte.

An introductory essays surveys recent theories and research on state socialism and outlines a new institutional perspective for understanding the dilemmas of partial reforms, the political cycles of reform and retrenchment, and the role of subordinate groups in stimulating changes outside the state sector.

Victor Nee is Professor of Sociology at Cornell University.

David Stark is Assistant Professor of Sociology at the University of Wisconsin.