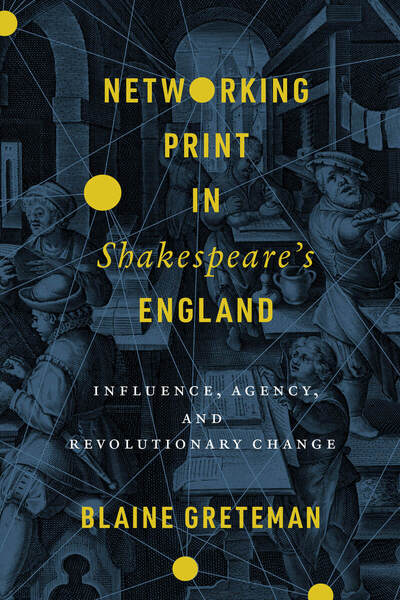 In Networking Print in Shakespeare's England, Blaine Greteman uses new analytical tools to examine early English print networks and the systemic changes that reshaped early modern literature, thought, and politics. In early modern England, printed books were a technology that connected people—not only readers and writers, but an increasingly expansive community of printers, publishers, and booksellers—in new ways. By pairing the methods of network analysis with newly available digital archives, Greteman aims to change the way we usually talk about authorship, publication, and print.

As Greteman reveals, network analysis of the nearly 500,000 books printed in England before 1800 makes it possible to speak once again of a "print revolution," identifying a sudden tipping point at which the early modern print network became a small world where information could spread in new and powerful ways. Along with providing new insights into canonical literary figures like Milton and Shakespeare, data analysis also uncovers the hidden histories of key figures in this transformation who have been virtually ignored. Both a primer on the power of network analysis and a critical intervention in early modern studies, the book is ultimately an extended meditation on agency and the complexity of action in context.

Blaine Greteman is Associate Professor of English, University of Iowa, and the author of The Poetics and Politics of Youth in Milton's England (2013).

"This book offers rigorous scholarship into print culture, while at the same time all the main terms of network theory appear, meticulously documented, clearly explained, and well illustrated by examples. This interweaving is beautifully accomplished, and the result is as delightful to read as it is deeply engaged in all the relevant scholarship."

"This is an important and much-needed work that provides a blueprint for scholars who wish to adopt network analysis for their own research.Greteman persuasively demonstrates how network analysis can make meaningful contributions to well-established humanistic research fields and questions."