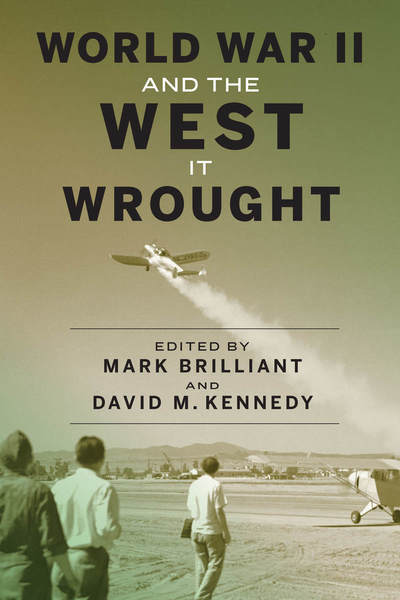 World War II and the West It Wrought
Edited by Mark Brilliant and David M. Kennedy

Few episodes in American history were more transformative than World War II, and in no region did it bring greater change than in the West. Having lifted the United States out of the Great Depression, World War II set in motion a massive westward population movement, ignited a quarter-century boom that redefined the West as the nation's most economically dynamic region, and triggered unprecedented public investment in manufacturing, education, scientific research, and infrastructure—an economic revolution that would lay the groundwork for prodigiously innovative high-tech centers in Silicon Valley, the Puget Sound area, and elsewhere.

Amidst robust economic growth and widely shared prosperity in the post-war decades, Westerners made significant strides toward greater racial and gender equality, even as they struggled to manage the environmental consequences of their region's surging vitality. At the same time, wartime policies that facilitated the federal withdrawal of Western public lands and the occupation of Pacific islands for military use continued an ongoing project of U.S. expansionism at home and abroad. This volume explores the lasting consequences of a pivotal chapter in U.S. history, and offers new categories for understanding the post-war West.

Mark Brilliant is Associate Professor of History and American Studies at UC Berkeley.

David M. Kennedy is the Donald J. McLachlan Professor of History, Emeritus, at Stanford and co-founder of Stanford's Bill Lane Center for the American West.

"Brimming with fresh insights on the modern West from an all-star roster of contributions, this stellar collection is an indispensable resource for understanding America's westward tilt and its broader significance to national and global history."

—Margaret O'Mara, author of The Code: Silicon Valley and the Remaking of America

"Exploring how mobilization for World War II and the early Cold War turned one region into a bellwether for the nation, World War II and the West It Wrought brings fresh insight and lucid prose to the task of explaining the profound changes to the mid-twentieth-century American West."

"This book by distinguished scholars at the top of their game speaks to topics not usually taken up by historians of the post-war West. I am not likely to teach mid-twentieth-century Western history quite the same."

—William F. Deverell, co-author of Shaped by the West