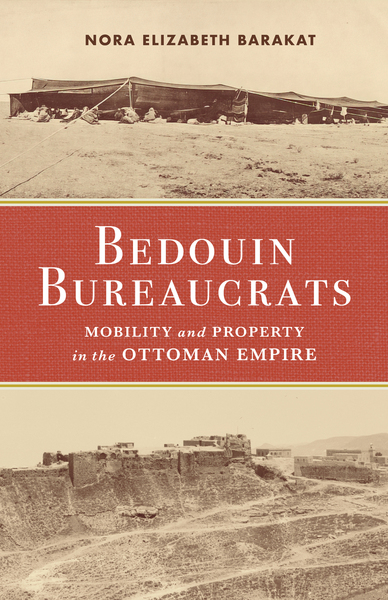 In the late nineteenth century, the Ottoman government sought to fill landscapes they legally defined as "empty." Both land and people were incorporated into territorially bounded grids of administrative law. Bedouin Bureaucrats examines how tent-dwelling, seasonally migrating Bedouin engaged in these processes of Ottoman state transformation on local, imperial, and global scales.As the "tribe" became a category of Ottoman administration, Bedouin in the Syrian interior used this category both to gain political influence and to organize community resistance to maintain control over land.

Narrating the lives of Bedouin individuals involved in Ottoman administration, Nora Elizabeth Barakat brings this population to the center of modern state-making, from their involvement in the pilgrimage administration in the eighteenth century and their performance of land registration and taxation as the Ottoman bureaucracy expanded in the nineteenth, to their eventual rejection of Ottoman attempts to reallocate the "empty land" they inhabited in the twentieth. She places the Syrian interior in a global context of imperial expansion into regions formerly deemed marginal, especially in relation to American and Russian empires. Ultimately, the book illuminates Ottoman state formation attempts within Bedouin communities and the unique trajectory of Bedouin in Syria, who maintained their control over land.

"Bedouin Bureaucrats is a marvel. It is necessary reading for anybody interested in the complexities of state-building, governance, and sovereignty. Nora Barakat has given us a book that will be debated and admired for years to come."

"A remarkable feat. Nora Barakat guides us through the contingencies of modern transformation, with an eye for global implications beyond Ottomans down to the present. Truly a ground-breaking work, it is a must-read for anybody interested in global micro-history, and in new ways of writing history."

"Through rigorous research and exceptional prose, Nora Barakat shows how Bedouin chiefs participated in the creation of new state structures to ensure their power and privilege and the long-term survival of their communities. Bedouin Bureaucrats convinces us to rethink our assumptions about tribes and their place in the modern Middle East."