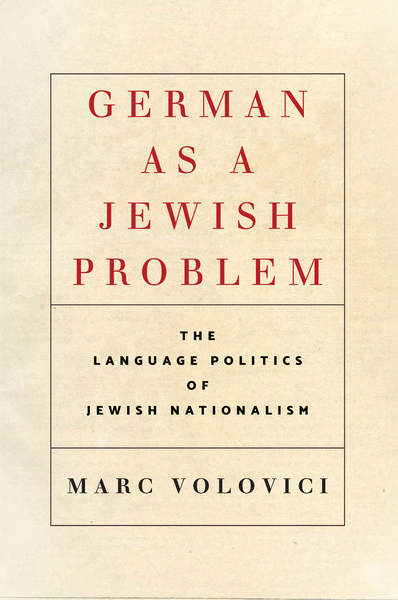 The German language holds an ambivalent and controversial place in the modern history of European Jews, representing different—often conflicting—historical currents. It was the language of the German classics, of German Jewish writers and scientists, of Central European Jewish culture, and of Herzl and the Zionist movement. But it was also the language of Hitler, Goebbels, and the German guards in Nazi concentration camps. The crucial role of German in the formation of Jewish national culture and politics in the late nineteenth century has been largely overshadowed by the catastrophic events that befell Jews under Nazi rule.

German as a Jewish Problem tells the Jewish history of the German language, focusing on Jewish national movements in Central and Eastern Europe and Palestine/Israel. Marc Volovici considers key writers and activists whose work reflected the multilingual nature of the Jewish national sphere and the centrality of the German language within it, and argues that it is impossible to understand the histories of modern Hebrew and Yiddish without situating them in relation to German. This book offers a new understanding of the language problem in modern Jewish history, turning to German to illuminate the questions and dilemmas that largely defined the experience of European Jews in the age of nationalism.

Marc Volovici is a Leverhulme Early Career Fellow at the Pears Institute for the Study of Antisemitism and the Department of History, Classics and Archaeology at Birkbeck, University of London.

"In this sparkling and original account, Marc Volovici unpacks the various meanings of German in modern Jewish history. A language of transcendence as well as tragedy, German transformed Jews in myriad ways and in so doing, blurred the traditional distinction between Jewish and non-Jewish languages. A fascinating, superbly told story."

"Training his eye on the omnipresence of German in European Jewish nationalist discourse, Marc Volovici reveals the profound significance of the language not only in the lives of those Jews who spoke it but also in the evolution of a much wider, transnational, multilingual community of Jews who read in German, wrote in German, and shaped their thinking about Jewish modernity and nationalism in, through, and against it. A major contribution to the fields of modern European Jewish history, the history of Zionism, and the study of national language politics in modern times."

Brothers from Another Planet