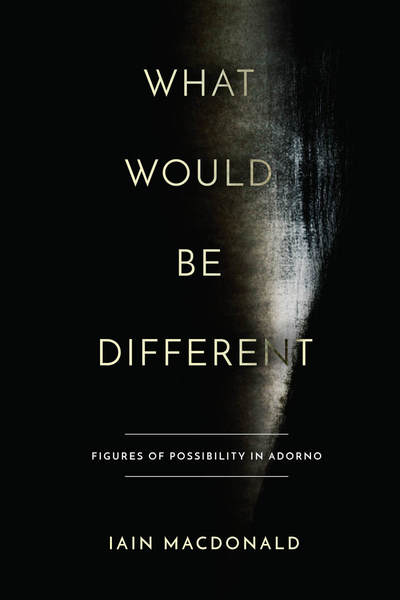 What Would Be Different
Figures of Possibility in Adorno
Iain Macdonald

Possibility is a concept central to both philosophy and social theory. But in what philosophical soil, if any, does the possibility of a better society grow? At the intersection of metaphysics and social theory, What Would Be Different looks to Theodor W. Adorno to reflect on the relationship between the possible and the actual. In repeated allusions to utopia, redemption, and reconciliation, Adorno appears to reference a future that would break decisively with the social injustices that have characterized history. To this end, and though he never explains it in any detail—let alone in the form of a full-blown theory or metaphysics—he also makes extensive technical use of the concept of possibility. Taking Adorno's critical readings of other thinkers, especially Hegel and Heidegger, as his guiding thread, Iain Macdonald reflects on possibility as it relates to Adorno's own writings and offers answers to the question of how we are to articulate such possibilities without lapsing into a vague and naïve utopianism.

Iain Macdonald is Professor of Philosophy at the Université de Montréal.

"This exemplary and highly original piece of philosophical scholarship precisely illuminates a central but hitherto unrecognized concern in Adorno's work—his notion of 'real but blocked possibility'—demonstrating how it operates throughout his writing. I know of no study similar to it."

"Macdonald is not only an authority on Adorno but also a deeply skilled philosopher. What Would Be Different deals with some ferociously difficult and abstract conceptual material while remaining lucid, careful, and thorough. Without question, it figures among the most genuinely pathbreaking recent work on Adorno."

"What is possible? With this question in mind, Macdonald sets out on a breathtaking intellectual journey. In a series of spectacularly powerful and compelling readings of such key thinkers as Hegel, Marx, Heidegger, Benjamin, Bloch, and Adorno, he throws new and much needed light on the post-Kantian philosophical tradition while offering resources for responding to our contemporary crisis."

"This much-needed book explores how possibility, for Adorno, can be thought beyond mere contingency or empty utopia. To ask 'what would be different' is as concrete as it is radical—and only radical insofar as it is concrete. Macdonald shows that the possible cannot be defined generally and ontologically but only historically and socially: as a world that could well be realized but that is blocked by the ruling powers."

"What Would Be Different presents readers with the results of years of fruitful effort....[It] takes an important stand in a debate that matters, not just to armchair academics, but to everybody on the planet."

"What Would Be Different provides us with an essential, long neglected, philosophical and biographical examination of Adorno and Heidegger's complicated relationship....[It offers] a valuable contribution to philosophy in that it provides a clear, non-partisan presentation of famously difficult thinkers from disparate traditions. Macdonald's synthesis and framing of these ideas is admirable."