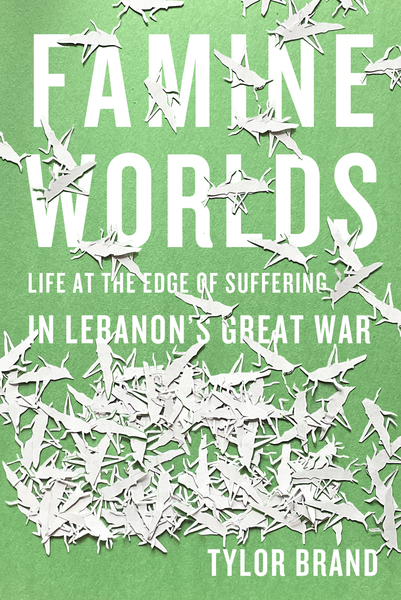 World War I was a catastrophe for the lands that would become Lebanon. With war came famine, and with famine came unspeakable suffering, starvation, and mass death. For nearly four years the deadly crisis reshaped society, killing untold thousands and transforming how people lived, how they interacted, and even how they saw the world around them. Famine Worlds peers out at the famine through their eyes, from the wealthy merchants and the dwindling middle classes, to those perishing in the streets.

Tylor Brand draws on memoirs, diaries, and correspondence to explore how people negotiated the famine and its traumas. Many observers depicted society in collapse—the starving poor became wretched victims and the well-fed became villains or heroes for the judgment of their peers. He shows how individual struggles had social effects. The famine altered beliefs and behaviors, and those in turn influenced social relationships, policies, and even the historical memory of generations to come.

More than simply a chronicle of the Great Famine, however, Famine Worlds offers a profound meditation on what it means to live through such collective trauma, and how doing so shapes the character of a society. Brand shows that there are consequences to living amid omnipresent suffering and death. A crisis like the Great Famine is transformative in ways we cannot comprehend. It not only reshapes the lives and social worlds of those who suffer, it creates a particular rationality that touches the most fundamental parts of our being, even down to the ways we view and interact with each other. We often assume that if we were thrust into historic calamity that we would continue to behave compassionately. Famine Worlds questions such confidence, providing a lesson that could not be more timely.

"Famine Worlds is a tour de force of history and theory. Tylor Brand recovers the silenced cultural and economic history of the famine of Lebanon, and makes it speak vitally to current debates on mass trauma in Lebanon and beyond. A must read for historians, anthropologists, and relief workers in our age of climate change."

—Elizabeth Thompson, author of How the West Stole Democracy from the Arabs

"One of the forgotten famines of the past is the tragedy that struck the mainly Maronite population of mountainous north Lebanon during World War I. Tylor Brand's study of a famine that will henceforth be better known is erudite and accessible, fair and empathetic. A great book."

—Cormac Gráda, author of Famine: A Short History and Eating People is Wrong: Essays on the History and Future of Famine

"Famine Worlds offers a fascinating window into a period often overlooked, and lucidly recounts the trials, tribulation, and turmoil of everyday people during the Great War. A highly recommended read and, without a doubt, a significant and thoroughly elucidating contribution to the history of the modern Middle East."

—Leila Fawaz, author of A Land of Aching Hearts: The Middle East in the Great War