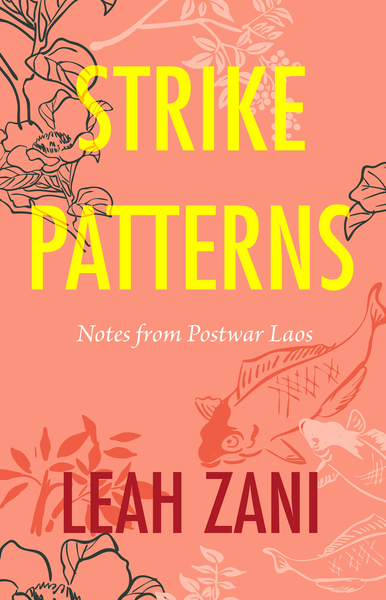 A strike pattern is a signature of violence carved into the land—bomb craters or fragments of explosives left behind, forgotten. In Strike Patterns, poet and anthropologist Leah Zani journeys to a Lao river community where people live alongside such relics of a secret war. With sensitive and arresting prose, Zani reveals the layered realities that settle atop one another in Laos—from its French colonial history to today's authoritarian state—all blown open by the war. This excavation of postwar life's balance between the mundane, the terrifying, and the extraordinary propels Zani to confront her own explosive past.

From 1964 to 1973, the United States carried out a covert air war against Laos. Frequently overshadowed by the war with Vietnam, the Secret War was the longest and most intense air war in history. As Zani uncovers this hidden legacy, she finds herself immersed in the lives of her hosts: Chantha, a daughter of war refugees who grapples with her place in a future Laos of imagined prosperity; Channarong, a bomb technician whose Thai origins allow him to stand apart from the battlefields he clears; and Bounmi, a young man who has inherited his bomb expertise from his father but now struggles to imagine a similar future for his unborn son. Wandering through their lives are the restless ghosts of kin and strangers.

Today, much of Laos remains contaminated with dangerous leftover explosives. Despite its obscurity, the Secret War has become a shadow model for modern counterinsurgency. Investigating these shadows of war, Zani spends time with silk weavers and rice farmers, bomb clearance crews and black market war scrap traders, ritual healers and survivors of explosions. Combining her fieldnotes with poetry, fiction, and memoir she reflects on the power of building new lives in the ruins.

Leah Zani, Ph.D, is an anthropologist, author, and poet writing on the social impact of war. She was Poetry Editor for Anthropology & Humanism and is the author of Bomb Children (2019). Her writing has also appeared in Consequence Magazine, Somatosphere, and Los Angeles Review of Books.

"Strike Patterns is a powerful and poetic observation of the remains of war. The book offers a poignant perspective on what scholarship and experience can yield in the hands of a writer unafraid of the boundaries between disciplines and across genres."

—Kao Kalia Yang, author of Somewhere in the Unknown World

"In fields of still-live explosives, the U.S. bombing of Laos has not stopped. Through a series of vivid meditations, Zani brings us to their horrors, where children play with cluster bombs, and some prostheses are judged too 'advanced' for Laotians. The stories ring with the kind of truth that can only be brought to light through artistry."

"Strike Patterns joins the best of anthropology of war books by centering the research in stories, and by acknowledging that while violence can transform societies, anthropology has an equal responsibility to shift patterns."