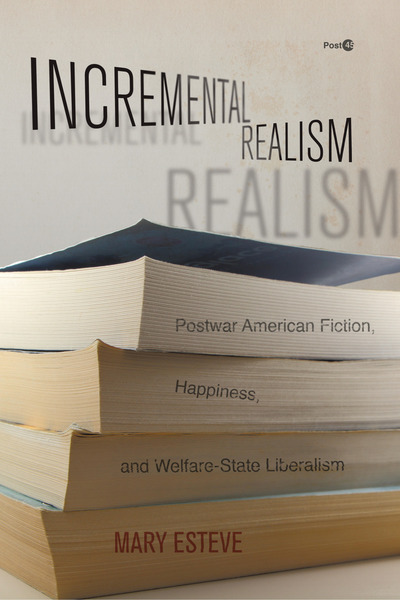 The postwar US political imagination coalesced around a quintessential midcentury American trope: happiness. In Incremental Realism, Mary Esteve offers a bold, revisionist literary and cultural history of efforts undertaken by literary realists, public intellectuals, and policy activists to advance the value of public institutions and the claims of socioeconomic justice.

Esteve specifically focuses on era-defining authors of realist fiction, including Philip Roth, Gwendolyn Brooks, Patricia Highsmith, Paula Fox, Peter Taylor, and Mary McCarthy, who mobilized the trope of happiness to reinforce the crucial value of public institutions, such as the public library, and the importance of pursuing socioeconomic justice, as envisioned by the United Nations Universal Declaration of Human Rights and welfare-state liberals. In addition to embracing specific symbols of happiness, these writers also developed narrative modes—what Esteve calls "incremental realism"—that made justifiable the claims of disadvantaged Americans on the nation-state and promoted a small-canvas aesthetics of moderation. With this powerful demonstration of the way postwar literary fiction linked the era's familiar trope of happiness to political arguments about socioeconomic fairness and individual flourishing, Esteve enlarges our sense of the postwar liberal imagination and its attentiveness to better, possible worlds.

Mary Esteve is Associate Professor of English at Concordia University in Montreal. She is the author of The Aesthetics and Politics of the Crowd in American Literature (2003).

"Mary Esteve has produced an original, ambitious, theoretically sophisticated, and deeply learned book that is both tightly focused and wide-ranging. Incremental Realism will be of interest to those seeking to understand the particularities of postwar American literature while also considering what, exactly, constitutes—or ought to constitute—this archive."

"Once I started reading this book, I couldn't stop. Incremental Realism is a serious and valuable piece of literary and historical scholarship, but that doesn't give full credit to how the subject matter speaks to the priorities and questions of our own time, or for that matter the subtlety of the argumentation and the passionate commitment to social justice that palpably underlies it."

"Esteve not only offers a new way of reading midcentury realist fiction, but she also garners renewed appreciation for the era's welfare-state liberalism... [The postmodernists'] utopian invitation to tear it all down and start over is profoundly alluring—and not particularly productive. The invitation in Incremental Realism is decidedly less sexy, but also redolent with realizable possibility for achieving socioeconomic justice: do the work."