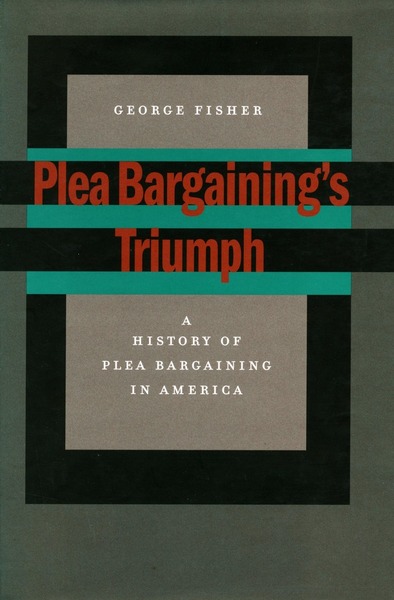 Though originally an interloper in a system of justice mediated by courtroom battles, plea bargaining now dominates American criminal justice. This book traces the evolution of plea bargaining from its beginnings in the early nineteenth century to its present pervasive role.

Through the first three quarters of the nineteenth century, judges showed far less enthusiasm for plea bargaining than did prosecutors. After all, plea bargaining did not assure judges “victory”; judges did not suffer under the workload that prosecutors faced; and judges had principled objections to dickering for justice and to sharing sentencing authority with prosecutors. The revolution in tort law, however, brought on a flood of complex civil cases, which persuaded judges of the wisdom of efficient settlement of criminal cases.

George Fisher is Professor of Law at the Stanford Law School. He is the co-editor, with Lawrence M. Friedman, of The Crime Conundrum: Essays on Criminal Justice.

"Bold in its own right, Plea Bargaining's Triumph is both an excellent synthesis and refutation of existing scholarship, and it may contribute to law reform."

"Fisher's wide-ranging and innovative approach makes a major contribution to our understanding of the origins and stability of plea bargaining as a central feature of our modern criminal courts."

"A practice like plea bargaining is so pervasive that no one gives it a second thought. It is good to look back to its origins, and Plea Bargaining's Triumph is to be praised, and read, for doing so."

"Fisher has produced the best account of the rise and 'triumph' of plea bargaining in the literature of American criminal justice history. He has also produced a provocative work of interdisciplinary history that merits the attention of all scholars who write about the past."