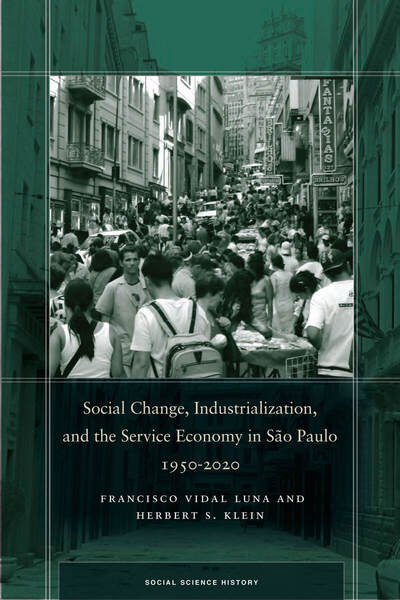 In the 1950s–80s, Brazil built one of the most advanced industrial networks among the "developing" countries, initially concentrated in the state of São Paulo. But from the 1980s, decentralization of industry spread to other states reducing São Paulo's relative importance in the country's industrial product. This volume draws on social, economic, and demographic data to document the accelerated industrialization of the state and its subsequent shift to a service economy amidst worsening social and economic inequality.

Through its cultural institutions, universities, banking, and corporate sectors, the municipality of São Paulo would become a world metropolis. At the same time, given its rapid growth from 2 million to 12 million residents in this period, São Paulo dealt with problems of distribution, housing, and governance. This significant volume elucidates these and other trends during the late twentieth and early twenty-first centuries, and will be an invaluable reference for scholars of history, policy, and the economy in Latin America.

Herbert S. Klein is the Gouveneur Morris Professor Emeritus at Columbia University and Research Fellow and Curator at the Hoover Institution, Stanford University.

"In this superb volume, Luna and Klein play to their strengths, documenting in immense factual detail the key facets of social and economic change in São Paulo from 1950 to 2020. A fundamental reference for anyone who seeks to understand the distinctiveness of São Paulo and the developing world more generally."

"In classic Luna and Klein style, this book brings their sweeping series on São Paulo into the twenty-first century. It offers a much-needed examination of how São Paulo's classic agricultural-to-industrial-success story has changed since 1950, and the effects of those changes on the economic and social development of the most vibrant economy in Latin America and the economic heart of Brazil."