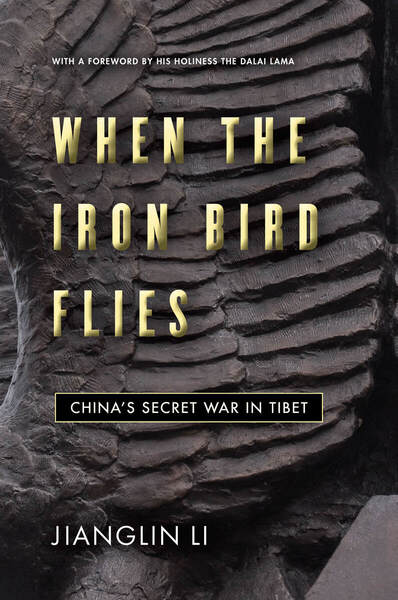 From 1956 to 1962, devastating military conflicts took place in China's southwestern and northwestern regions. Official record at the time scarcely made mention of the campaign, and in the years since only lukewarm acknowledgment of the violence has surfaced. When the Iron Bird Flies, by Jianglin Li, breaks this decades long silence to reveal for the first time a comprehensive and explosive picture of the six years that would prove definitive in modern Tibetan and Chinese history.

The CCP referred to the campaign as "suppressing the Tibetan rebellion." It would lead to the 14th Dalai Lama's exile in India, as well as the Tibetan diaspora in 1959, though the battles lasted three additional years after these events. Featuring key figures in modern Chinese history, the battles waged in this period covered a vast geographical region. This book offers a portrait of chaos, deception, heroism, and massive loss. Beyond the significant death toll across the Tibetan regions, the war also destroyed most Tibetan monasteries in a concerted effort to eradicate local religion and scholarship.

Despite being considered a military success, to this day, the operations in the agricultural regions remain unknown. As large numbers of Tibetans have self-immolated in recent years to protest Chinese occupation, Li shows that the largest number of cases occurred in the sites most heavily affected by this hidden war. She argues persuasively that the events described in this book will shed more light on our current moment, and will help us understand the unrelenting struggle of the Tibetan people for their freedom.

Jianglin Li is an independent writer and researcher with expertise in Tibetan history and the Tibetan diaspora. She is the author of numerous books, including Tibet in Agony: Lhasa 1959 (2016).

"In this book we have the for the first time a Chinese historian presenting conclusive research on Tibet's recent history. It is my hope that through this historical documentation establishing the truth of what happened, Chinese intellectuals, and all other readers, will come to understand the real situation and be able to deepen their approach to and understanding of the Tibet problem in the spirit of seeking truth from facts. With my praise and admiration for the author on the fruition of her many labours." –His Holiness the Dalai Lama

"Jianglin Li is a treasure. The confines of our knowledge about Tibet have expanded dramatically as a result of her dogged research. She has done for Tibet what Chinese historians like Yang Jisheng have done for the Great Leap Forward and the Cultural Revolution: uncovered, at considerable personal cost, a history that the Communist Party tried hard to conceal."

"Jianglin Li has pieced together by far the most comprehensive and compelling picture of the devastation wreaked by China upon Tibet. This book is likely to remain the definitive source, and therefore required reading, for anyone interested in this history."

—Anne F. Thurston, co-author with Gyalo Thondup of The Noodle Maker of Kalimpong

"To have this kind of detail about these events is exceptional. Until now, historians had assumed that 1959 marked the end of major conflict between the PLA and Tibet. This important study corrects those notions, and expands our understanding about the deep tensions that continue to reverberate in much of China's western territories."

"When the Iron Bird Flies provides the most comprehensive account to date of the brutal and bloody conflicts that took place between the PLA and Tibetans. Combining rigorous research with extensive interviews with Tibetan refugees, this book sheds light on those violent critical years of state incorporation."

"Authoritative, exhaustive, and reliable, Jianglin Li's account sets a new standard for the history of Sino-Tibetan relations and deftly depicts the momentous historical transition of a region little known to outsiders."

"This extraordinarily important book reveals for the first time the ruthless military campaign against local rebellions that the PLA waged across vast Tibetan regions. This long-hidden story, told in a series of powerfully dramatic vignettes, reshapes our understanding of the formative years of the People's Republic of China."

"[When the Iron Bird Flies] provides many startling details about how the Chinese Communist Party cracked down on Tibetans from 1956 through 1962. The work of Li, an independent scholar born in China, has an aspect of a detective story because the Chinese government has never disclosed much of what happened... Does any of this matter now, decades later? I think so. As I read Li's study, I thought of the current Chinese government crackdown on the Uyghurs of far northwestern China. I suspect that many of the lessons the Communist Party learned in Tibet are being applied now."