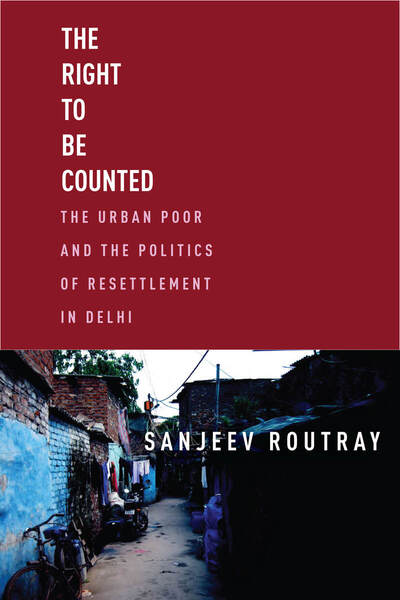 The Right to Be Counted
The Urban Poor and the Politics of Resettlement in Delhi
Sanjeev Routray
SERIES: South Asia in Motion

In the last 30 years, Delhi, the capital of India, has displaced over 1.5 million poor people. Resettlement and welfare services are available—but exclusively so, as the city deems much of the population ineligible for civic benefits. The Right to Be Counted examines how Delhi's urban poor, in an effort to gain visibility from the local state, incrementally stake their claims to a house and life in the city. Contributing to debates about the contradictions of state governmentality and the citizenship projects of the poor in Delhi, this book explores social suffering, logistics, and the logic of political mobilizations that emanate from processes of displacement and resettlement. Sanjeev Routray draws upon fieldwork conducted in various low-income neighborhoods throughout the 2010s to describe the process of claims-making as an attempt by the political community of the poor to assert its existence and numerical strength, and demonstrates how this struggle to be counted constitutes the systematic, protracted, and incremental political process by which the poor claim their substantive entitlements and become entrenched in the city. Analyzing various social, political, and economic relationships, as well as kinship networks and solidarity linkages across the political and social spectrum, this book traces the ways the poor work to gain a foothold in Delhi and establish agency for themselves.

Sanjeev Routray is Assistant Professor in the Institute of Asian Studies at Universiti Brunei Darussalam.