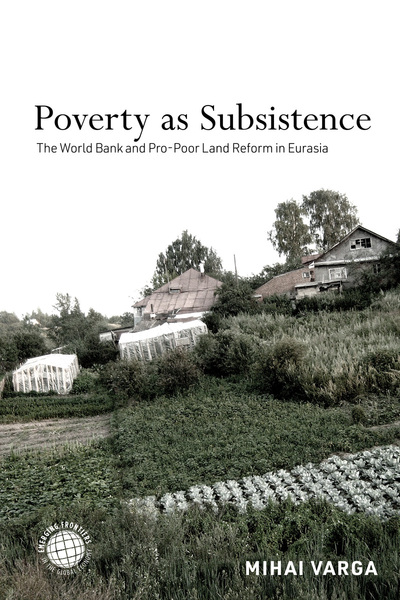 Poverty as Subsistence explores the 'propertizing' land reform policy that the World Bank advocated throughout the transitioning countries of Eurasia, expecting poverty reduction to result from distributing property titles over agricultural land to local (rural) populations. China's early 1980s land reform offered support for this expectation, but while the spread of propertizing reform to post-communist Eurasia created numerous "subsistence" smallholders, it failed to stimulate entrepreneurship or market-based production among the rural poor. Varga argues that the World Bank advocated a simplified version of China's land reform that ignored a key element of successful reforms: the smallholders' immediate environment, the structure of actors and institutions determining whether smallholders survive and grow in their communities. With concrete insights from analysis of the land reform program throughout post-communist Eurasia and multisited fieldwork in Romania and Ukraine, this book details how and why land reform led to subsistence and the mechanisms underpinning informal commercialization.

Mihai Varga is a Lecturer and Senior Research Fellow in Sociology at the Eastern Europe Institute, Freie Universität Berlin. He was a Max Weber Fellow in 2011-2012 and his research focuses on economic crises and their political and socioeconomic consequences.

"The creation of private property in land on the farms of post-communist Europe and Central Asia failed to produce a class of commercially-minded entrepreneurial farmers. Mihai Varga shows us why. This is a major book on post-communist agrarian change, with important insights of much wider contemporary relevance."

"Poverty as Subsistence is a must read for scholars, policy makers, and development practitioners considering land transfers and market-based solutions to rural poverty. Mihai Varga's timely analysis provides powerful insights on why and how agricultural reforms advocated by the World Bank and other agencies often undermine livelihoods of tightly knit rural economies."

"This book demonstrates that the World Bank failed in post-communist transition by adopting a too narrow and ideological perspective on institutional reforms. It focused too much on creating individual property rights and not enough on the institutional environment of purchasing and distribution. Varga's insightful work reveals the result: that the World Bank reduced post-communist countries to a pre-war model of subsistence agriculture."

—Mitchell A. Orenstein, University of Pennsylvania