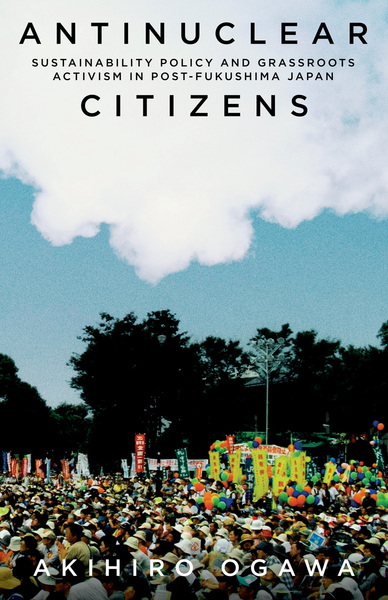 Following the Great East Japan Earthquake on March 11, 2011, tsunamis engulfed the Fukushima Daiichi nuclear power plant located on Japan's Pacific Coast, leading to the worst nuclear disaster the world has seen since the Chernobyl crisis of 1986. Prior to this disaster, Japan had the third largest commercial nuclear program in the world, surpassed only by those in the United States and France—nuclear power significantly contributed to Japan's economic prosperity, and nearly 30% of Japan's electricity was generated by reactors dotted across the archipelago, from northern Hokkaido to southern Kyushu.

This long period of institutional stasis was, however, punctuated by the crisis of March 11, which became a critical juncture for Japanese nuclear policymaking. As Akihiro Ogawa argues, the primary agent for this change is what he calls "antinuclear citizens"— a conscientious Japanese public who envision a sustainable life in a nuclear-free society. Drawing on over a decade of ethnographic research conducted across Japan—including antinuclear rallies, meetings with bureaucrats, and at renewable energy production sites—Ogawa presents an historical record of ordinary people's actions as they sought to survive and navigate a new reality post-Fukushima. Ultimately, Ogawa argues that effective sustainability efforts require collaborations that are grounded in civil society and challenge hegemonic ideology, efforts that reimagine societies and landscapes—especially those dominated by industrial capitalism—to help build a productive symbiosis between industry and sustainability.

Akihiro Ogawa is Professor of Japanese Studies at the University of Melbourne. He is the author of Lifelong Learning in Neoliberal Japan (2015) and the co-editor of New Frontiers in Japanese Studies (2020).