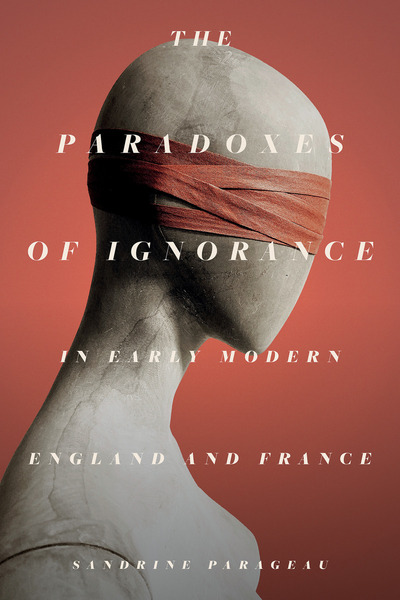 In the early modern period, ignorance was commonly perceived as a sin, a flaw, a defect, and even a threat to religion and the social order. Yet praises of ignorance were also expressed in the same context. Reclaiming the long-lasting legacy of medieval doctrines of ignorance and taking a comparative perspective, Sandrine Parageau tells the history of the apparently counter-intuitive moral, cognitive and epistemological virtues attributed to ignorance in the long seventeenth century (1580s-1700) in England and in France.

With close textual analysis of hitherto neglected sources and a reassessment of canonical philosophical works by Montaigne, Bacon, Descartes, Locke, and others, Parageau specifically examines the role of ignorance in the production of knowledge, identifying three common virtues of ignorance as a mode of wisdom, a principle of knowledge, and an epistemological instrument, in philosophical and theological works. How could an essentially negative notion be turned into something profitable and even desirable? Taken in the context of Renaissance humanism, the Reformation and the "Scientific Revolution"—which all called for a redefinition and reaffirmation of knowledge—ignorance, Parageau finds, was not dismissed in the early modern quest for renewed ways of thinking and knowing. On the contrary, it was assimilated into the philosophical and scientific discourses of the time. The rehabilitation of ignorance emerged as a paradoxical cornerstone of the nascent modern science.

Sandrine Parageau is Professor of Early Modern British History at Sorbonne University and a Fellow of the Institut Universitaire de France.

"Parageau has assembled a rich set of texts, and she reads them with care and nuance, establishing 'ignorance' as a key word in early modern Europe."

"Was a heightened appreciation of ignorance crucial to the new science of the seventeenth century? That is Parageau's insightful claim, based on new attention to the legacy of medieval negative theology among other sources."