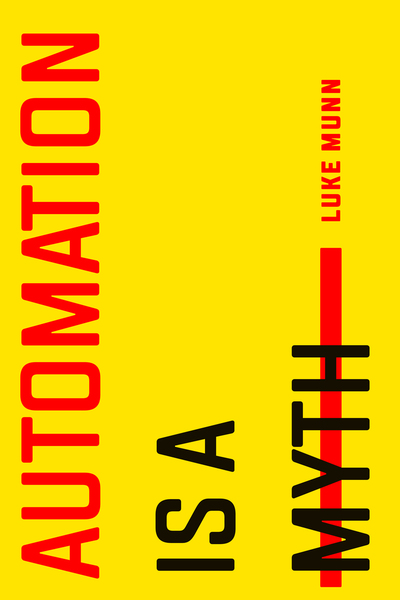 Automation Is a Myth
Luke Munn

For some, automation will usher in a labor-free utopia; for others, it signals a disastrous age-to-come. Yet whether seen as dream or nightmare, automation, argues Munn, is ultimately a fable that rests on a set of triple fictions. There is the myth of full autonomy, claiming that machines will take over production and supplant humans. But far from being self-acting, technical solutions are piecemeal; their support and maintenance reveals the immense human labor behind "autonomous" processes. There is the myth of universal automation, with technologies framed as a desituated force sweeping the globe. But this fiction ignores the social, cultural, and geographical forces that shape technologies at a local level. And, there is the myth of automating everyone, the generic figure of "the human" at the heart of automation claims. But labor is socially stratified and so automation's fallout will be highly uneven, falling heavier on some (immigrants, people of color, women) than others. Munn moves from machine minders in China to warehouse pickers in the United States to explore the ways that new technologies do (and don't) reconfigure labor. Combining this rich array of human stories with insights from media and cultural studies, Munn points to a more nuanced, localized, and racialized understanding of the "future of work."

Luke Munn is a researcher based in Aotearoa New Zealand exploring the social, political, and environmental impacts of digital cultures.

"Warehouses, factories, fields, supermarkets, smart-homes. These are just some of the material sites that confront myths of automation in Luke Munn's tightly crafted book traversing racial histories, gender politics, contemporary labor regimes, and global logistics. Fantasies of autonomous technologies and visions of freedom, we discover, are almost always accompanied by human endurance and suffering, as well as sparkling acts of collective ingenuity that mess with machines. Munn critically furnishes the bleak, uneven world of automation with alternatives for technology design inspired by activists, artists, and social movements. A perfect handbook for diagnosing the future-present of automated worlds."

"Accessibly written and powerfully argued, Luke Munn's Automation is a Myth carefully demonstrates how the fiction that automation is everywhere and that every aspect of labor and production can or will be automated obscures racialized and gendered power relations and precludes opportunities to shape more radical technologically mediated futures. With wide ranging historical and geopolitical examples of automation fantasies, Munn forcefully demonstrates the importance of contextualizing and de-universalizing conversations about labor, technology and automation."