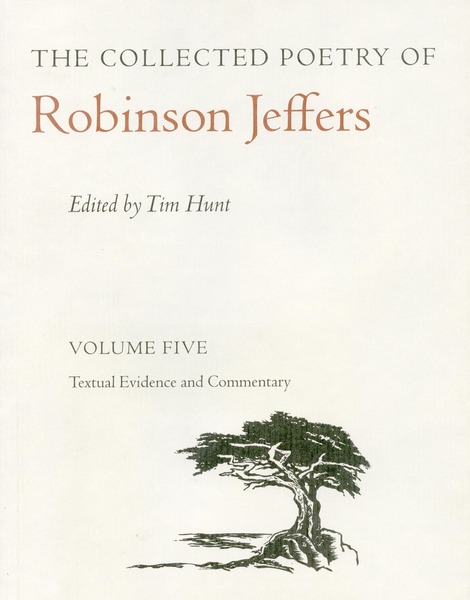 Jeffers consciously set himself apart from the poetry of his generation—by physical isolation at his home in Carmel, by his unusual poetic form, and by his stance as an “anti-modernist.” Yet his work represents a profound, and profoundly original, artistic response to problems that shaped modernist poetry and that still perplex poets today. Now, for the first time, all of Jeffers’s completed poems, both published and unpublished, are presented in a single, comprehensive, and textually authoritative edition of five volumes.

The present volume is in four parts. An Introduction deals with the scope and principles of selection for the edition, including the decision to present the poems in chronological order, and gives a brief review of the textual evidence and commentary that form the bulk of this volume. The essay “Chronology” offers an overview of Jeffers’s career, the evidence for dating the poems, and the arguments drawn from that evidence.

The two parts that follow describe the rationale and evidence for establishing the texts of the poems for this edition, and present, in the form of extensive commentary and tabulations for each poem, the material (notes, preliminary workings, revisions, discarded passages, and variations in published versions) that both complicate and enrich the study of Jeffers’s poetry and prose. These commentaries also incorporate a number of additional selections from Jeffers’s previously unpublished writings.

There are three appendixes: tables of contents for original editions as well as some planned editions that were never published; poems (not included in this edition) that have appeared in posthumous compilations; and errata for the first four volumes. The book concludes with two indexes, of titles and of first lines.

"It is an indispensable resource and itself a study of Jeffers. Hunt brings together more poems than Jeffers put in books, presenting them chronologically (order of composition). That sheds light on choices Jeffers made as he developed as a poet."

"The commentaries in the concluding volume are precise, textually insightful, and highly useful. The section on evidence and procedures is also cause for thanks, since it will give generations of readers a handle on Jeffers's manner of composition. This volume, along with the rest of the set, is recommended for libraries serving upper-division undergraduates through faculty."