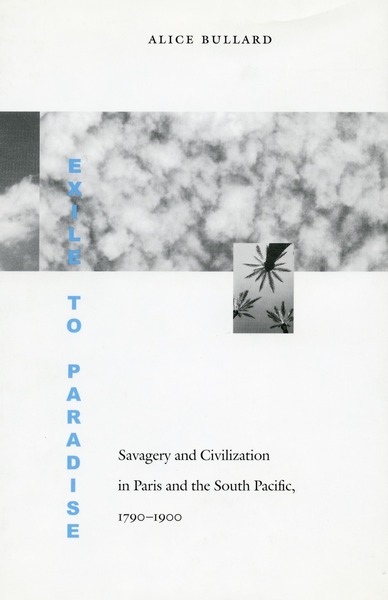 Exile to Paradise
Savagery and Civilization in Paris and the South Pacific, 1790-1900
Alice Bullard

According to the poet Victor Hugo, the year 1870/71 was France's année terrible. The country suffered a humiliating defeat by the Prussian military, and Parisians endured a cruel siege. In the wake of the siege, Paris exploded and revolutionaries proclaimed the birth of the Paris Commune.

The conservative government of the young Third Republic portrayed the Communards as savage destroyers of civilization. The Communards were depicted as plagued by original sin, the evil nature of fallen man, and atavistic degeneration. These alleged traits aligned them with tribal peoples who were commonly thought to be severed from justice, liberty, and divine love. The punishment of the Communards was an odd one; some 4,500 revolutionaries were exiled to the South Pacific colony of New Caledonia with the hope that the inherent truths of nature would instill in their minds a natural morality.

However, the French government had not sufficiently considered the presence of the indigenous people of these "wilderness islands," the Melanesian Kanak. If the Communards were to be moralized by New Caledonia, how was it that the Kanak—who had lived for thousands of years on this land—did not also profit from this moralizing influence? This was just the first paradox provoked by the deportation of Parisian "political savages" to the land of these "natural savages." The surprising parallels and interactions between the Melanesians and the Parisians in their confrontation with the forces of French civilization form the substance of this book. It explores such themes as the history of the self, moralization as a means to civilization, nostalgia as a fatal illness, and colonial humanitarianism and gendered hybridity.

The French attempt to impose a universal moral standard and a particular form of "civilized self" on Communards and Kanak provoked fearsome battles, acerbic rhetorical inversions and fictional re-visionings through which oppositional identities and non-civilized "selves" took on form and solidity. This book places moral imperialism within the context of French republicanism and points to the beginnings of an era (the 1910s) when the recognition, rather than the domination, of the other attained an honored place in French theory.

Alice Bullard is Assistant Professor of History at the Georgia Institute of Technology.

"Bullard weaves a captivating account of individual experiences in the context of the major political, social, philosophical, and moral issues involved in the colonizing of New Caledonia. Her work offers insights into the conflicts that still exist among the inhabitants of this far-away island and its relationship to France."

"This is an interesting and useful book covering a number of gaps in the historiography and developing some potentially exciting new avenues for research."