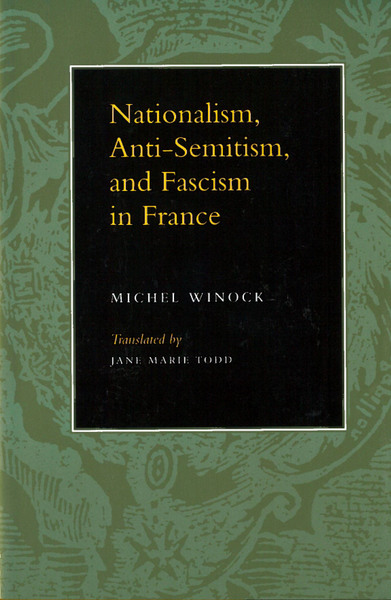 This wide-ranging work confronts the complex question of nationalism in France in its various permutations—myths, obsessions, possibilities, and dangers. French nationalism has always been a double-edged sword, from its beginnings in the French Revolution through the two Napoleonic empires, Boulangism, the Dreyfus affair, the fascist groups of the 1930’s, Marshal Pétain’s National Revolution during World War II, and its latest contemporary incarnation in Jean-Marie Le Pen’s National Front.

The author distinguishes between an “open” nationalism, based on the revolutionary values of liberty and equality for all, and “closed” nationalism, which is xenophobic—and, more particularly, antisemitic. He studies not only governments and political figures—Napoleon, Louis Napoleon, Marshal Pétain, and General de Gaulle—but also the myths associated with nationalism. These myths are captured in newspaper articles (the charity bazaar fire of 1897), in literature (Huysmans, Céline), and in the writings of insurgents (Edouard Drumont, Jules Guérin). The author pays particular attention to French “national socialism,” which wanted to transcend the categories of left and right in order to unite workers and owners under the banner of a providential leader, but which inevitably scapegoated the Jews. In tracing the history of closed nationalism and its need for a providential man, the author also sheds new light on the relation between socialism and fascism in France, most recently brought to the fore by the Mitterand government in the 1980’s.

In the process of analyzing nationalism in France, the author draws on areas of study ranging from French anti-Americanism and Zeev Sternhell’s history of “unconscious” fascism in France to the mythical use of Joan of Arc in the service of antisemitism.

Michel Winock is a professor of political and intellectual history at the Institut d'Etudes Politiques in Paris.

"Nationalism, Anti-Semitism, and Fascism in France is testament to Winock's vibrancy and imagination as a scholar of fascism and to his considerable reputation as a historian of ideas and intellectuals."Journal of Jewish Studies