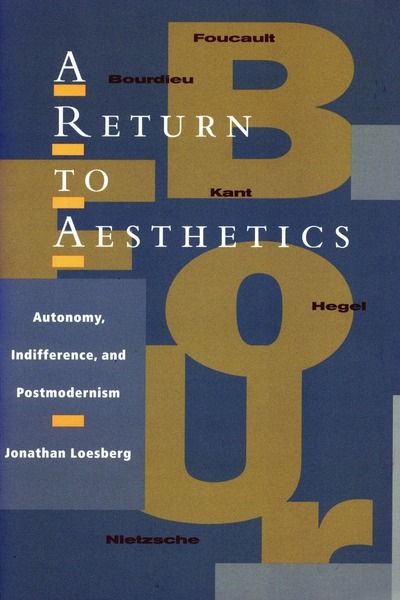 A Return to Aesthetics
Autonomy, Indifference, and Postmodernism
Jonathan Loesberg

A Return to Aesthetics confronts postmodernism's rejection of aesthetics by showing that this critique rests on central concepts of classical aesthetic theory, namely autonomous form, disinterest, and symbolic discourse. The author argues for the value of these concepts by recovering them through a historical reinterpretation of their meaning prior to their distortion by twentieth-century formalism. Loesberg then applies these concepts to a discussion of two of the most significant critics of the ideology of Enlightenment, Foucault and Bourdieu. He argues that understanding the role of aesthetics in the postmodern critique of Enlightenment will get us out of the intellectual impasse wherein numbingly repeated attacks upon postmodernism as self-contradictory match numbingly repeated defenses. Construing postmodern critiques as examples of aesthetic reseeing gives us a new understanding of the postmodern critique of the Enlightenment.

Jonathan Loesberg is Professor of Literature at American University. He is the author of two previous books: Fictions of Consciousness: Mill,

Newman, and the Reading of Victorian Prose (1986) and Aestheticism and

"...this is a forward-looking and vital contribution to aesthetics. In a convincing account, which masterfully links careful historical analysis with contemporary debate, Loesberg offers what is badly needed: a way out and beyond the ideological impasse between the alleged foundationalism of aesthetics and the supposed anti-aesthetics of postmodernism."

"A Return to Aesthetics offers a fresh and interesting approach to the classical concepts of the aesthetic theory, namely autonomous form."

—Consciousness, Literature and the Arts