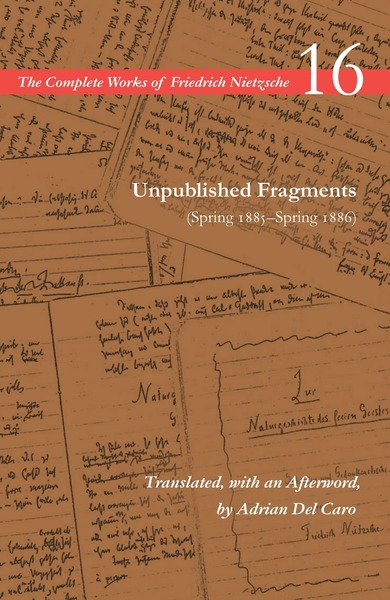 This volume of The Complete Works provides the first English translation of all Nietzsche's unpublished notes from April 1885 to the summer of 1886, the period in which he wrote his breakthrough philosophical books Beyond Good and Evil and On the Genealogy of Morality. Keen to reinvent himself after Thus Spoke Zarathustra, the philosopher used these unpublished notes to chart his search for a new philosophical voice. The notebooks contain copious drafts of book titles; critical retrospection on his earlier projects; a critique of the feminine; prophetic commentary on Germany; and forays into metaphysics, epistemology, ethics, aesthetics, and language. They also reveal his deep concern for Europe and its future and a burgeoning presence of the Dionysian. We learn what Nietzsche was reading and from whom he borrowed, and we find a considerable portion of notes and fragments from the non-book "Will to Power," though here they are unembellished and unmediated. Richly annotated and accompanied by a detailed translator's afterword, this landmark volume sheds light on the controversy surrounding the Nachlass of the 1880s.

Adrian Del Caro is Professor of German and Distinguished Professor of Humanities at the University of Tennessee.

"This series will become the definitive resource for English readers, a resource much needed given the great wave of philosophical, literary, and political interest in Nietzsche's thought. The excellent translations draw on the latest scholarship and are based on the state-of-the-art Colli-Montinari edition. The editors and translators have taken care to provide consistency in rendering Nietzsche's German and explaining important terms and variants. With their extensive and helpful annotations, the translations are indispensable for the scholar and appealing to the general reader."

"Stanford University Press is doing Nietzsche studies and readers in the English-speaking world a great service through its support and publication of this series of translations of Nietzsche's texts. The Colli-Montinari (de Gruyter) critical edition of Nietzsche's writings, on which they are based, is the German-language 'gold standard' for Nietzsche scholarship. The Stanford series, as it fills out, will undoubtedly come to hold comparable pride of place for English-speaking readers world-wide."