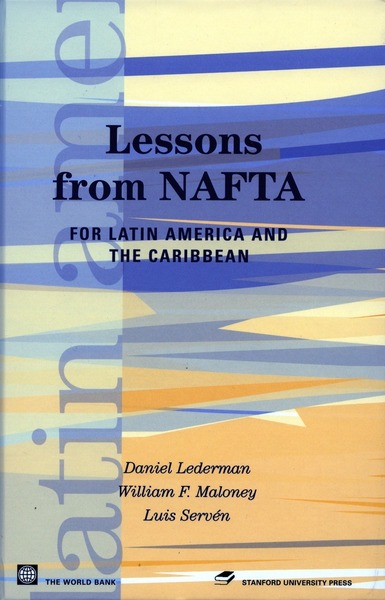 Analyzing the experience of Mexico under the North American Free Trade Agreement (NAFTA), the authors draw lessons for other countries considering free trade agreements with the United States. The authors conclude that NAFTA raised external trade and foreign investment inflows and had a modest effect on Mexico’s average income per person. It is likely that NAFTA also helped achieve a modest reduction in poverty and an improvement in job quality. However, major obstacles remain to Mexico’s long term development—NAFTA is not enough. The main lesson for other countries is that free trade agreements offer opportunities to accelerate economic growth, but do not guarantee it.

"Lederman, Maloney, and Serven offer an excellent empirical investigation into the impacts of the North America Free Trade Agreement (NAFTA) on the Mexican economy. . . . The authors pay close attention to the experiences of other Latin American countries and the European Union while avoiding ideological debates."

"Lessons from NAFTA is important perhaps less for what it tells us about changes under a free-trade agreement and more for its nuanced and careful empirical investigation of how trade can actually make people better off. This, indeed, is the 'big story' of NAFTA and the potential for free trade agreements in the region."