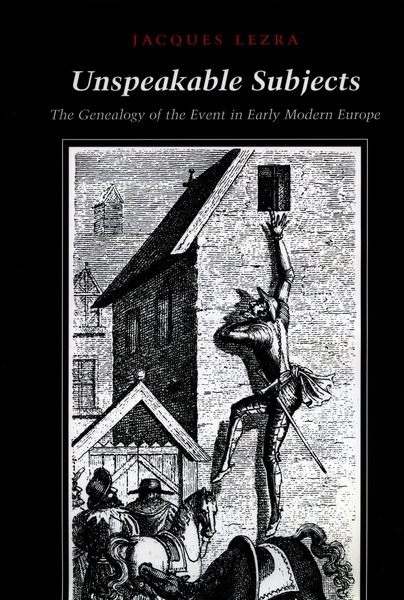 In groundbreaking readings linking works of Descartes, Shakespeare, and Cervantes with contemporary revisions of Freud and Nietzsche, Unspeakable Subjects argues that the concepts and discourses that have come to define European modernity—the subject's extension and responsibility, genealogies of intention and of freedom, the literary, legal, and medical construction of the body, among others—arise as strategies for evading a profound redefinition of the nature of events in early modern Europe.

Negotiating the often competing claims of rhetorical reading and cultural analysis, Lezra reassesses the grounds of literary and philosophical history as a materialist practice of eventful reading. His original accounts of Don Quixote, Descartes's Second Meditation and Regulae, and Measure for Measure tack between linguistic, psychoanalytic, and cultural materialist approaches to define and discuss the double aspect of the event in early modern literature and philosophy, and in Freudian and Heideggerian critical discourse: the event is at once an accident, the unpredictable, deontic intrusion of the empirical in idealizing schemes, and the disclosing and recollecting of a subject's relation to discursive and cultural morphologies in which empirical events are said properly to take place.

The advent of "modernity," Unspeakable Subjects argues, arises as the novel account of the permanently interrupted negotiation between the event's deontic and its morphological aspects. If Unspeakable Subjects considers on this level the "singularities" of textual events, it also seeks to show their complex relation to the "singularities" of the forms given material history.

Drawing upon such varied sources as the proclamations of James I, the law of entail, Renaissance treatises on typography, and documents on Jacobean and Elizabethan privateering, as well as accounts of the "events" of May 1968 and of Lacan's treatment of the fort-da game, and of the cultural uses of the figure of Don Quixote in Spanish proto-Falangist thought, the author shows that the institutional setting and conditions for literary and philosophical speech-acts, and the graphic constraints upon the bodies that such acts support, also take shape according to patterns set in response to the instability of the event.

"What one sees in Unspeakable Subjects is Jacques Lezra's uniquely personal conjugation of theoretical interests with the resisting pressures of history, literary history, and philology. I find no convenient label to describe his brand of reading, but I strongly suspect that he will be one of the critics who redefines and rehistoricizes literary theory in the coming decades. Lezra is, to my mind, one of the most gifted intellects of his generation of literary scholars."

"The range of Lezra's admirable work is immense, but so is the historical scholarship. Context is never lost from view; apparent anachronisms turn out to afford brilliant reflections on the complicated temporality of reading. Unspeakable Subjects does not seek to understand, not does it seek a licence for the contemporary critic to say whatever he/she pleases. It asks what has become of Shakespeare, Cervantes, and Descartes in our hands, and it shows, in devastating detail and often with considerable wit, how much of us was already in the texts of those early writers."