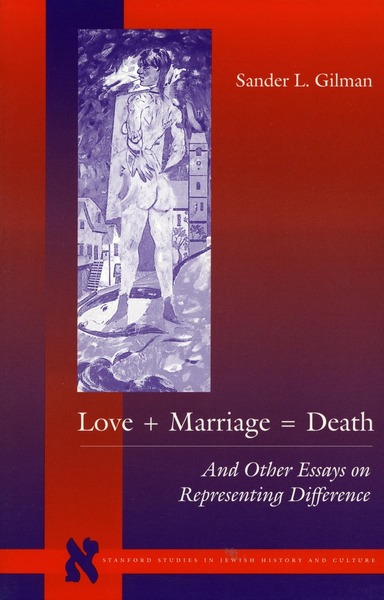 The essays in this collection, written by a pioneering interdisciplinary scholar, deal with the roles of images in the construction of stereotypes and the categories of difference as represented in texts—in high literature, in medical literature, in art—from the last fin-de-siècle to our own. Intensely engaged in the cultural politics of everyday life and conscious of how texts reflect and shape our social practices, they deal primarily with representations and self-representations of “Jews” in the past one hundred years and focus on the question of the constructions of the Jew’s body in art and literature. The title essay, “Love + Marriage = Death: STDs and AIDS in the Modern World,” however, studies the image of sexually transmitted disease from Shakespeare to Martin Amis. It sets the tone for an understanding of this collection as a book about Jews and their representation, but not as a special, isolated case.

The first essay, the largely autobiographical “Ethnicities: Why I Write What I Write,” serves as an introduction to the collection. The other essays are: “Max Nordau, Sigmund Freud, and the Question of Conversion”; “Salome, Syphilis, Sarah Bernhardt, and the ‘Modern Jewess’”; “Zwetschkenbaum’s Competence: Madness and the Discourse of the Jews”; “Otto Weininger and Sigmund Freud: Race and Gender in the Shaping of Psychoanalysis”; “Sibling Incest, Madness, and the Jew”; “R. B. Kitaj’s ‘Good Bad’ Diasporism and the Body in American Jewish Postmodern Art”; and “Who Is Jewish?: The Newest Jewish Writing in German and Daniel Goldhagen.”

Sander L. Gilman is Henry Luce Professor of the Liberal Arts in Human Biology at the University of Chicago. He is the author and/or editor of more than fifty books, most recently Smart Jews: The Construction of the Ideas of Jewish Superior Intelligence at the Other End of the Bell Curve.