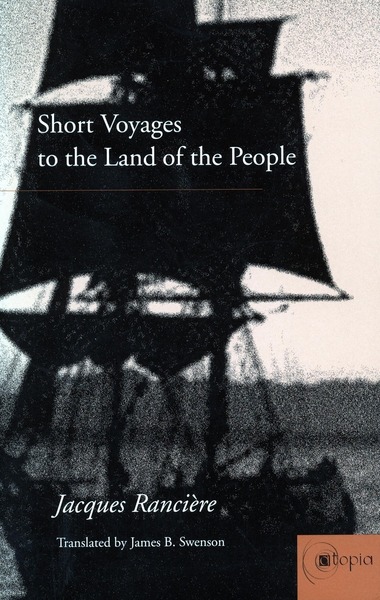 This book analyzes a range of texts that seek, in different ways, to represent "the people." Rancière approaches these texts as travel narratives or ethnographies whose authors have traveled not to distant or exotic lands but across class lines. In this truly comparative study, he examines Wordsworth's poetry, the utopian discourse of the Saint-Simoniens, the correspondence and theater of Büchner, Claude Genoux's Mémoires d'un enfant de la Savoie, Michelet's theories of history, the prose and poetry of Rilke, and the performance of Ingrid Bergman in Rossellini's postwar film Europe 51.

Rancière examines the various forms of displacement that affect his subjects, enabling each to become foreign to the sites and trajectories commonly known as reality.

He argues convincingly that "the people" have no proper signification in the texts under consideration, instead, they function as points of reality upon which the voyager can drape a conceptual framework shaped by the circumstances not of the other, but of the self.

Jacques Rancière is Professor of Philosophy at the University of Paris VIII. His most recent book in English is Disagreement: Politics and Philosophy.