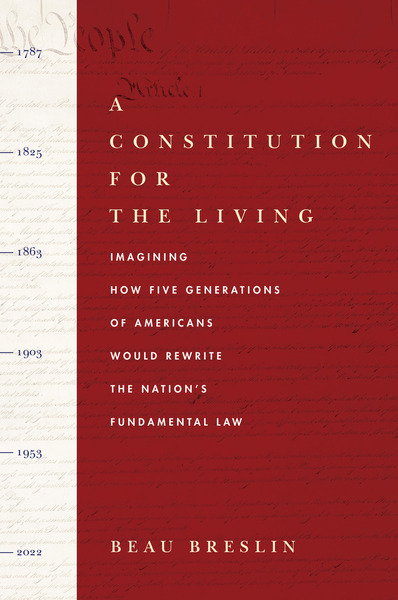 The introduction sets up the premise of the book by recounting the true story of a famous dinner party hosted by Thomas Jefferson. The 1789 dinner, which took place in Paris, included four prominent guests. The topic of conversation that night was constitutionalism. It was here that Jefferson discussed an argument he made to James Madison about the value of generational constitutions. For Jefferson, the "earth belongs to the living," by which he meant that every generation has a right to draft its own constitutional text. A Constitution that endures beyond the age of a single generation is the very definition of tyranny, Jefferson argued. One generation simply cannot dictate to another what its political and social priorities ought to be.

The narrative of the first imaginary Constitutional Convention in 1825 includes characters such as Daniel Webster, Martin van Buren, John Gaillard, Horatio Seymour, and Jefferson himself. The Convention pits the Jacksonian Democrats, who favor a more populist agenda, against the Federalists (like Webster) who prefer a more traditionalist, conservative world view. The Jacksonian Democrats will triumph in this duel, and the Federalists will fade from the political scene. The topics discussed at this imaginary Convention include electoral college reform, extending the vote to all white men, the proper placement of a Bill of Rights, federal protection of a potential right to education, and the increasing power of an independent judiciary.

The imaginary 1863 Constitutional Convention takes place at the midpoint of the American Civil War. Convention delegates begin by relocating away from the hostilities, up the Atlantic coast to Boston. They issue invitations to the states of the Confederacy, but they receive no response. In Boston, many constitutional questions are explored, including whether to extend suffrage to the freed slaves and whether to establish a "freedman's bureau." In the end, the Convention agrees to draft clauses that emancipate the slaves, guarantee their equal rights, and grant them the right to vote. The Convention also covers issues of apportionment and the need for loyalty oaths should the Confederate states rejoin the Union. Talk, at the end, turns to ratification and how to get the southern states to acknowledge the authority of a Constitution they had no hand in drafting.

Back in Philadelphia, the 1903 imaginary Constitutional Convention begins with a recognition that the 1863 Constitutionâ€”the Constitution of the prior generationâ€”has failed. On the minds of delegates are the financial panic of the late nineteenth-century, Reconstruction and Redemption, the plight of the everyday worker, and the increasingly imperialist nature of American foreign policy. This is the first Constitutional Convention to include people of color, though no women are invited. Even so, the delegation takes up the women's suffrage movement's call and simultaneously exposes a clandestine "southern strategy" to dilute the Black vote. Booker T. Washington and Quanah Parker are important players in the crafting of the 1903 Constitution.

The world is changing. In fact, it changes so dramatically in the first half of the twentieth century that the 1953 Constitutional Convention delegates choose to explore major topics such as federalism, term limits for the President, the lingering effects of slavery and racism, and the importance of unanimous state ratification. The draft Constitution that emerges from these proceedings will be the longest in American history, including in it a number of minute provisions. The 1953 gathering is perhaps best remembered as the first to include women.

The 2022 Constitutional Convention emerges from of a quasi-crowdsourcing process, not the only invention of this particular assembly. The selection process for delegates is dramatically changed, with the bulk of the Convention-goers elected directly by the people of each state. Proposals are made to reimagine the "undemocratic" Senate and to alter the Presidential term to a single six-year stint. Other proposals include the introduction of a third branch of Congressâ€”the National Assemblyâ€”as well as term limits for Congressmembers, a constitutional right to a protected environment, and an alteration of the right to bear arms. The Convention gets bogged down in a debate over the constitutionality of the right to privacy. It ends with an interesting modification of the text's famous Preamble.