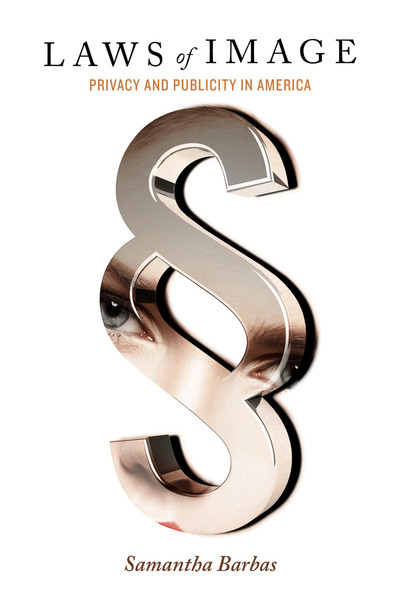 Laws of Image
Privacy and Publicity in America
Samantha Barbas

The late 19th century saw the rise of the sensationalistic popular press in the United States, and with it, the expansion of libel law and litigation. In increasing number, both famous and ordinary people were bringing suit against the press over false, defamatory, unflattering depictions. Once seen as something to be negotiated through social interactions, in the rough and tumble of everyday life, reputations and public images were becoming legal entities, to be controlled and maintained through the use of law and legal institutions.

"The Right to Privacy" by Samuel Warren and Louis Brandeis, published in the Harvard Law Review in 1890 and dubbed the "most famous law review article of all time," established the practical and theoretical foundations of the tort action for invasion of privacy. The privacy action permitted people to sue over the mental anguish that ensued when they were depicted before the public in an embarrassing or unfavorable manner, even though the material was not necessarily false or defamatory. Like the surge in libel litigation, the development of the right to privacy was a response to the rise of the popular press. It also reflected a new sensitivity to public image that emerged from the demands of social life in a urban, commercial, mass-mediated society, where appearances, first impressions, and superficial images were becoming important foundations of social evaluation and judgment.

3 The Crisis of the Circulating Portrait
chapter abstract

Despite its invention as a remedy for the victims of sensationalistic journalism, the tort of invasion of privacy was rarely used in that context in its early years. The right to privacy took off in a different kind of violation of the right to one's image. At the turn of the 20th century, the right to privacy was mobilized in cases where people were upset about having their visual likenesses presented to the public in a displeasing manner. In particular, individuals whose photographs had been used in advertisements without consent brought suits for invasion of privacy. At a time when advertising was seen as disreputable, these acts of image appropriation were regarded as truly offensive. The right to privacy was the right to recover for the anguish caused by this particular form of identity theft — having one's picture used, without authorization, in an embarrassing and undignified commercial context.

The emerging mass media were not the only threats to personal image in turn of the century urban America. Commercial institutions such as railroads, department stores, and theatres were also posing threats to people's reputations, public images, and social identities. In an era before courtesy was standard in service occupations, patrons suffered acts of shaming and public humiliation by train conductors, theater ushers, and other commercial personnel. By the early twentieth century, courts had devised a tort action that would permit people to recover damages for emotional distress caused by these sorts of insults. This law of 'institutional insult,' the forerunner of the modern tort of intentional infliction of emotional distress, was an important component of the developing laws of image. Like the right to privacy, it was a right to legal redress for injuries to one's public image and one's feelings about one's image.

In the first decades of the twentieth century, the United States became an image society. In an emerging culture of celebrity and consumption, a nation where the mass media, especially visual media, were exerting a powerful hold over the popular consciousness, Americans were envisioning themselves and their social identities as images, entangled with, if not congruent with, the impressions they made in the eyes of others. The self inhered in the image: who one was was how one appeared before others, and that appearance was fluid and malleable. The self lived on the surface and was continuously regenerated through managed acts of self-performance and self-display. The actor became the modal self, and the act of managing and perfecting one's image was freighted with tremendous emotional and psychological weight.

6 The Laws of Image
chapter abstract

As the image-conscious sensibility gained purchase on the popular imagination, and the mass media proliferated, existing areas of law were expanded and new laws created to protect people's interests in their public images. In the 1930s and 40s, a majority of states recognized the tort right to privacy, described as a right to avoid undesirable and "unwarranted publicity." Libel claims increased, and courts were extending libel law to address a broad range of harms to people's emotions, reputations, and public personas. A new tort action remedied serious, intentionally inflicted injuries to people's feelings, including their feelings about their images. In a number of different contexts, courts were recognizing a right to manage and control aspects of one's public image, and the personal image lawsuit became a fixture of American legal culture.

7 The Freedom to Image
chapter abstract

Before World War I, William James Sidis was a famous child prodigy. As an adult, Sidis neglected his talents and retreated from public life. At 39, he was an adding-machine operator living alone in a shabby rooming house. The New Yorker wrote up his story in the magazine in 1937. Humiliated, Sidis sued for invasion of privacy. This chapter tells the story of the 1940 case Sidis v. F.R. Publishing, a milestone in the history of personal image law. Sidis was the first decision from a high federal court to imply that the right to privacy could be limited in the interest of freedom of speech. Sidis suggested that the right of the individual to control and express his own public image impinged on a more important right: the right of publishers to make and circulate images of people, and the right of the public to consume those images.

8 An Age of Images
chapter abstract

By the 1950s, the laws of image were firmly established in American law and legal culture. Both the famous and the unknown were asserting a sense of entitlement to their images and mobilizing the law to defend themselves against unwanted publicity and perceived distortions of their public personae. Although courts in the post World War II era imposed further limitations on the image torts in the name of freedom of speech, the proliferation of the media, new communication technologies, and a cultural focus on personal images and "image management" nonetheless led to the significant growth of image law and personal image litigation. At the same time the laws of image were being narrowed, they expanded to accommodate people's increasing protectiveness of their public images in an image-saturated society, what was being described as an "age of images."

9 Privacy and the Image in Postwar America
chapter abstract

The privacy tort came into its own in the 1950s and 60s. The number of reported privacy cases more than doubled that of any previous decade, and the tort was recognized in a majority of states. After years of avoiding the question, in 1967 the Supreme Court finally addressed the question of whether, as a matter of formal constitutional law, the privacy tort could coexist with modern interpretations of freedom of speech. The uneasy, tentative truce between privacy and free speech that the Court achieved in Time, Inc. v. Hill (1967) was emblematic of the culture of the time, which struggled to reconcile competing commitments to personal freedom — the freedom to determine one's own public persona and the freedom to make images of people and public affairs.

Privacy and the Image in Postwar America
chapter abstract

By the 1970s, the basic doctrines of the tort laws of image had been established, as had the "image-conscious sensibility." As this book has illustrated, the twentieth century witnessed the rise of a cultural attitude or outlook in which the self is conceptualized in terms of images. The law both responded to and contributed to this focus on images and the rise of the image-conscious self. A body of tort law — "image law" — was created to protect the individual's public image, his ability to control his image, and his feelings about his image. Free speech limitations notwithstanding, American culture embraced the idea of a legal right to be vindicated and compensated for image-based harms, part of a broader, fundamental right to possess and control the self.