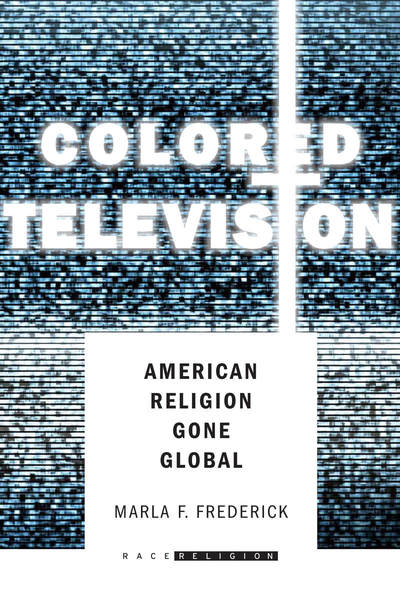 The introduction includes a statement on the methodology used to complete this ethnography as well as an outline of individual chapters. It further highlights the three theoretical interventions of this text. These include firstly, the insistence that the web of religious broadcasting cannot be understood without a full appreciation of the aims, motivations and desires of all those involved – producers, consumers and distributors. Secondly, Colored Television takes seriously the discourse of intersectionality, arguing that the issues of race, class and gender explored in this book help explain elements present in the rise of both gospels of prosperity and increasingly important discourses around sexuality. Finally, while not reducing religion solely to market forces, this work argues that the business of broadcasting fundamentally alters religion and the experiences of the faithful.

Given the emergence of popular images of televangelists as wealthy, status-driven media personalities who embody the prototypical, rags-to-riches American success story, Chapter Two explores the history of the emergence African Americans as televangelists. The chapter argues that race and American racism played as much a part in the development of these character types as the theologies of Word of Faith or neo-Pentecostal personalities. In many ways the presentation of "Americanness" through the acquisition of the American dream – fine cars, tailored suits, lavish lifestyles – provided an image of racial uplift that was missing from black protest religion. The story of Rev. Frederick Eikenrenkoetter and other leading black televangelists contextualize the ways in which the flamboyant dress style, or "religious dandyism" of ministers was as much about creating a narrative of possibility for colored people as it was about the fashion and egoism of the preacher.

Chapter three explores how American theologies of prosperity are appropriated by viewers in Jamaica. As neoliberalism exports the utopian ideal of the "free market" to countries around the globe, developing countries are often confined by the realities of their local often underdeveloped and/or exploited (exploitable) markets. Living under challenging economic pressures, local Jamaicans make sense of imported gospels of prosperity by developing more complicated, relative understandings of the nature of prosperity. Those in the viewing audience who receive messages of health and wealth in the face of poverty and affliction often interpret prosperity as relative in terms of time, space and constitution.

4 "Female Televangelists and the Gospel of Sexual Redemption"
chapter abstract

Chapter four looks at the phenomenal influence of women televangelists. It argues that women's ascendance in religious broadcasting is often influenced by their personal testimonies of sexual trauma and God's power to redeem and restore their lives. Their "gospels of sexual redemption" recalling experiences of rape, incest, early pregnancy, divorce and sexual promiscuity opens up important, though limited, discursive space for the discussion of sexuality among female religious viewers. The chapter discusses evangelists Paula White and Joyce Meyer, giving particular attention to the influence of Juanita Bynum, an African American woman whose testimony of abuse and sexual promiscuity garnered her tremendous popularity in the US and abroad.

Chapter five examines how the social and economic conditions in which Jamaican women find themselves often inform their experiences of sexuality. These experiences in turn influence how women relate to the messages of sexual redemption preached by televangelists. The chapter argues that while religious broadcasting offers a conservative approach to the practice of sexuality, confining sexual activity to marriage and offering a masculinist narrative of female submission to male authority, it also offers women an opportunity to redefine their sexual histories and make sense of personal tragedy. For women from traditional religious backgrounds, the personal theodicies of women evangelists who share their stories of abuse, out of wedlock childbirth and sexual promiscuity offer viewers opportunities to recast their own sexual histories in light of redemptive narratives.

6 "Distributing the Message: Globalization and the Spread of Black Televangelism"
chapter abstract

Chapter six explores the power of distributors and the meanings of race in the global market. Scholars of religious broadcasting have long discussed the influence of politically and theologically conservative Trinity Broadcasting Network (TBN), the largest religious cable network in the world. This chapter explores the emergence of black owned networks and networks which cater to "urban" African American markets, such as TV One in the United States and Mercy and Truth Ministries and Love TV in Jamaica, which make room for a different kind of religious broadcasting format, presumably informed by different social commitments. It asks how these new outlets for religious broadcasting negotiate the demands of the neoliberal marketplace and attempt to create an alternative vision of the intersection of religion and the market in a post-civil rights, post-apartheid, post-colonialist historical moment.

7 "Conclusion: Voices of the Next Generation"
chapter abstract

The Conclusion focuses on the increasing influence of the Internet, over and against religious television broadcasting. Here questions are raised as to how the emergence of the Internet, like the shift to paid time broadcasting in the 1960s, might ultimately reshape religious broadcasting. Focused on the success of a ministry in Atlanta, Ga that has grown largely through internet broadcasting, the final chapter wonders whether, given the changes in technology, whether the the contours of what we have come to understand as popular religion will eventually shift to something that moves beyond prosperity messages and self help proclamations? As the democratization of religious media through the internet and social media sites takes full shape, it is likely that popular religious media narratives will be disrupted by people from across the globe and the theological spectrum, not just those savvy and wealthy enough to survive on religious television.