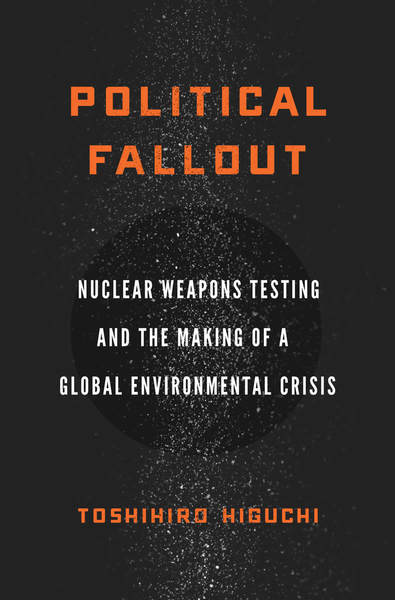 Contents
Excerpt from Introduction
Contents and Abstracts
Introduction: "To Put an End to the Contamination of Man's Environment"
chapter abstract

The 1963 Partial Test Ban Treaty (PTBT) is typically known as a first step toward nuclear-arms control and lesser international tension. Less known is another objective to curb the radioactive contamination of the Earth by atmospheric tests. This book argues that fallout became an unacceptable hazard through the "politics of risk," a worldwide struggle to determine the scientific uncertainty, social acceptability, and policy implications of potential harm from fallout. The Cold War drove this contested knowledge production, as the United States, Britain, the Soviet Union, and key non-nuclear countries mobilized scientists to shape or challenge the acceptability of fallout hazards. Risk politics brought the diverse practices of Cold War science around the world into greater synchronization. By connecting the issues of fallout and a test-ban, it also forged the reciprocal relationship between the Cold War and the Anthropocene, an era of human-induced global environmental change.

1 A State of Emergency: The Origins of Radiation Protection in Nuclear Weapons Testing, 1945-1953
chapter abstract

This chapter examines the origins of radiation protection in the testing of nuclear weapons. It explains how the perceived political urgency to develop nuclear weapons led the United States, Britain, and the Soviet Union to define the dangers of radioactive fallout to the general public in a strikingly similar manner as those limited to the risk of acute illness in the test-site region. It also shows that the same logic of national security "emergency" led the Cold War nuclear rivals to start secretly monitoring the global dispersion of fallout as a useful tracer for military intelligence and planning. The compartmentalization of fallout monitoring further obscured potential harm of widespread radioactive contamination from public view.

This chapter focuses on Japan, a key U.S. ally in Asia, as the first country that experienced a major fallout crisis. In 1954, the United States conducted the Castle Bravo thermonuclear bomb test at Bikini Atoll, resulting in radioactive contamination of hundreds of people, including the crew of a Japanese tuna boat. The chapter explains how the U.S. effort to contain the disaster's political fallout backfired. Supported by the U.S. government and the tuna industry, Japanese authorities checked radioactivity in tuna against the most stringent standards to reassure consumers about its safety. This led to the further discovery of contaminated fish and fueled a nationwide panic. The chapter demonstrates how the "atomic-bomb tuna" sparked the rise of anti-nuclear activism in Japan led by concerned housewives. It also examines how U.S. and Japanese officials relied on their scientists to defuse the crisis by introducing the concept of permissible dose.

This chapter discusses the role of geneticists in the fallout controversy following the 1954 U.S. Castle Bravo thermonuclear bomb test. It explains how geneticists from the United States and the Soviet Union seized on an uproar over the test to promote understanding of genetic damage caused by radiation. With no institutional base, however, these scientists failed to forge a consensus and bring debates to a closure. The chapter illustrates the key role that the scientists' movement in breaking this stalemate by proposing a UN fallout study for international regulation of nuclear tests. To keep the issue of fallout apart from that of a test ban, the United States and Britain sponsored a UN committee as a purely technical body while commissioning studies from groups of distinguished scholars in their countries. These moves, however, opened the door to the further scrutiny of the safety claims by appointed experts.

This chapter examines the assessment of fallout hazards by the U.S. National Academy of Sciences and the British Medical Research Council. It demonstrates how the complex matrix of scientific and regulatory agendas led the two committees to reach a similarly reassuring conclusion regarding genetic damage but strongly disagree over the cancer risk of strontium-90. The disclosed discordance between the committee reports issued in June 1956 firmly embedded the fallout controversy in the test-ban debate, as advocates of arms control on both sides of the Atlantic began to demand the suspension of nuclear tests as a precautionary measure. The chapter also examines flexible responses of the test-ban opponents, who began to appropriate anti-pollution rhetoric and offered the promise of a technological solution, dubbed as the "clean bomb," to arrest the growing momentum for an international regulation of nuclear testing.

This chapter examines the United Nations Scientific Committee on the Effects of Atomic Radiation's assessment of fallout hazards. Its chief sponsors, the United States and Britain, mobilized their superior research resources to guide the committee's work toward a reassuring conclusion. Their epistemic leadership, however, eroded in the face of multiple challenges led by the Japanese and Soviet scientists. The discovery of highly contaminated rice in Japan resonated with the discourse of race, presenting Asians as the victims of the nuclear-armed West. A coalition of Soviet physicists and geneticists also assisted the Kremlin's test-ban propaganda to combat the nuclear threat abroad and Lysenkoism at home. The chapter also discusses the key role the transnational movement of intellectuals played in questioning the morality of harming innocent bystanders. The transformed understanding of fallout affected a series of policy decisions by the nuclear powers leading to a nuclear-test moratorium.

This chapter examines community-based fallout surveys in the United States and Britain during the nuclear-test moratorium and their policy impact. Some of the major radioactive "hot spots" in these countries overlapped with pockets of political dissent, including Minnesota and Wales. Resentful of the government's control of fallout information, concerned scientists and citizens checked radioactivity in food and drink in their communities. This "local turn" in risk politics led to the discovery of unusually contaminated wheat and milk, forcing government officials to admit the insufficient scientific basis of their safety claims. The chapter also discusses how opponents of arms control in the United States developed the technique of underground nuclear testing to contain fallout without stopping all tests. The loss of public trust in the safety of tests and the technological innovation together paved the way to the Anglo-American decision to seek an atmospheric test ban.

This chapter examines the final phase of the test-ban negotiations after the Soviet Union abruptly restarted atmospheric nuclear testing in September 1961. While this action, soon reciprocated by the United States, seemed to suggest the lack of concern about fallout between the superpowers, the chapter reveals the continuous and robust influence of the redefined fallout hazards on the policymaking process. Although policymakers still considered nuclear tests as a matter of national security, some political leaders and scientific advisers continued to view fallout as morally objectionable. The refusal of U.S. and British officials to take countermeasures against contamination also deepened the public's distrust, whereas antinuclear activists put contaminated milk and children at the center of concern. The chapter also explains how the Soviet scientists, torn between national security and fallout hazards, developed underground testing techniques. The anti-fallout norms and technological innovations together contributed to the Partial Test Ban Treaty.

Conclusion: "We Can Live in Strength Without Adding to the Hazards of Life on This Planet"
chapter abstract

This chapter summarizes the book's key arguments and reflects on the implications of risk politics beyond the 1963 Partial Test Ban Treaty. The idea of fallout as an unacceptable hazard generated international pressure on China and France to end atmospheric testing. The norms against fallout have been robust, as no newly declared nuclear countries have ever conducted atmospheric tests. By driving nuclear tests underground, however, the politics of risk also concealed the health and environmental costs of the continuing nuclear-arms race from public view. It also reinforced a perceived distinction in risk acceptability between military and civilian uses of atomic energy. Most significantly, it failed to draw public attention to the suffering of those directly affected by atmospheric tests. The politics of risk thus shaped the course of the nuclear age, the Cold War, and environmental thoughts after the PTBT by unraveling emerging awareness of their historical connections.