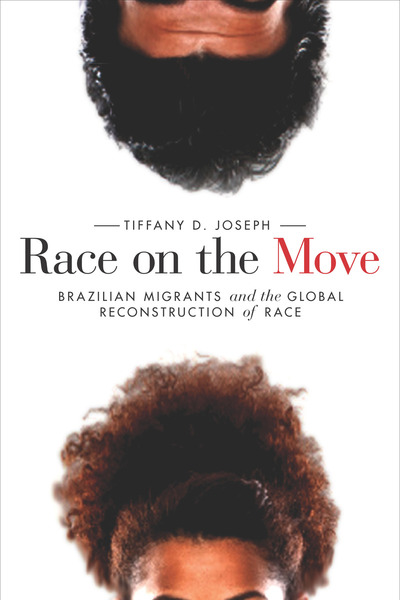 Race on the Move
Brazilian Migrants and the Global Reconstruction of Race
Tiffany D. Joseph

This chapter describes how racial ideals move across borders via individuals who migrate between countries. This discussion is framed by scholarly debates regarding racial frameworks in the United States and Brazil and argues that migration can be used to comparatively examine race in both countries using the experiences of Brazilian return migrants in the city of Governador Valadares. The chapter introduces the theoretical concept of the transnational racial optic and concludes with a brief discussion of the author's positionality in conducting the study.

This chapter introduces readers to the city of Governador Valadares (GV). It explores the history of the U.S. presence there and how migration has transformed the city into a place where people, money, and culture flow to and from Brazilian immigrant enclaves in the United States. The chapter concludes with a discussion of how this transnational context shaped Valadarenses' racial conceptions before migrating.

This chapter delves into returnees' perceptions of and experiences with the U.S. racial divide in terms of discrimination, interpersonal relationships, and residential segregation. The discussion is framed by migrants' comparisons of black Americans—whom migrants perceive as upwardly mobile but racist—and black Brazilians—whom migrants perceive as socially disadvantaged but less racist. Migrants discover that in spite of overt racism in the United States, Americans of different races experience more social mobility than Brazilians.

This chapter explores migrants' renegotiation of their racial and skin tone classifications after their return migration and incorporates the perspectives of nonmigrants. The chapter compares returnees' and non-migrants' classifications and examines both groups' perceptions of the relationship between sun exposure and skin color. This chapter shows that migrants use U.S. racial classification norms to resituate themselves within Brazilian categories.

This chapter examines how returnees remit U.S. racial ideals to GV by comparing returnees' and non-migrants' views of racial stratification in Brazil. It explores differences in these groups' perceptions of racial democracy, manifestations of racism, and black Brazilians. The chapter illustrates how the transnational racial optic facilitated a shift in returnees' racial conceptions after their U.S. migration experience. The chapter concludes with a discussion of how both groups believe U.S. migration has changed race relations in GV.

This chapter discusses how race, socioeconomic status, and gender influenced the extent to which the transnational racial optic influenced returnees' racial conceptions. The chapter also examines how migration altered their post-migration racial attitudes and behaviors, including their interactions with non-migrants, their transnational investment in whiteness, their opinion of Brazilian racial quotas, and their views of civic engagement. The chapter concludes by discussing how the transnational racial optic may facilitate a remaking of race in Brazil.

The conclusion summarizes the book's theoretical contributions, namely that return migration provides a nuanced vantage point for exploring the impact of migration, how racial ideals in Brazil and the United States are converging, and how the transnational racial optic can alter social constructions of race via migration. These contributions are framed within a discussion of how Brazilian migrants can enhance the study of the racial assimilation of U.S. immigrants amid debates on the Latin Americanization of U.S. race relations. The chapter then addresses how migrants' transmission of racial ideals between countries has the potential to yield global racial reformations, with implications for the study of racial classification, stratification, and discrimination in various countries.