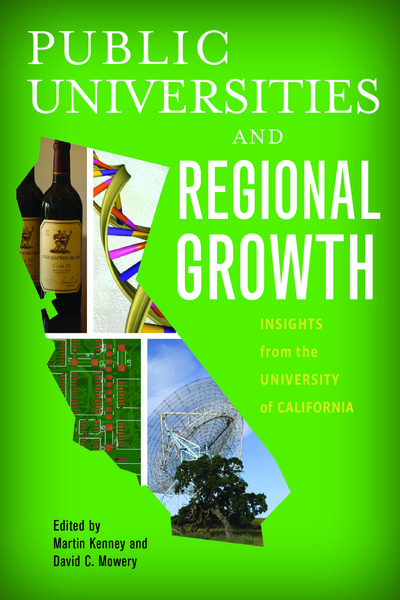 Public Universities and Regional Growth
Insights from the University of California
Edited by Martin Kenney and David C. Mowery

Public Universities and Regional Growth: Insights from the University of California

This volume examines the evolution of university–industry relationships in research and innovation at six campuses of the University of California system, ranging from viticulture to computer science. This collection of studies enriches our understanding of the dynamics of university–industry relationships and regional economic development. Each chapter contains a historical analysis of the evolution of academic and industrial research, innovation, and regional development in specific research fields. The chapters provide a richer characterization of the bidirectional flow of individuals, ideas, and resources between industrial and academic research and innovation than appears in empirical analyses that rely on patenting, article citations, and licensing. The book's discussion of university–industry interactions at a leading public U.S. research university system adds to the literature on such private U.S. universities as Stanford and MIT and illustrates the heterogeneous relationships that have evolved at different UC campuses. The coverage of research fields is broader than recent historical studies, many of which have concentrated primarily on biotechnology or the life sciences generally.

This volume examines the evolution of university–industry relationships in research and innovation at six campuses of the University of California system, ranging from viticulture to computer science. This collection of studies enriches our understanding of the dynamics of university–industry relationships and regional economic development in several ways. First, each chapter relies on historical analysis of the evolution of academic and industrial research, innovation, and regional development in specific fields of research. This provides a richer characterization of the interactive relationship between industrial and academic research and innovation than appears in many empirical analyses that focus mainly on patenting, article citations, and licensing. Second, the coverage of research fields is broader than recent historical studies, many of which have concentrated primarily on biotechnology or the life sciences generally. The cases illustrate the bidirectional nature of much technology transfer.

UC Berkeley, UCLA, and UC Santa Barbara developed close relations with California-based semiconductor corporations. The solid state electronics program at UC Berkeley grew in close contact with semiconductor firms in Silicon Valley and contributed new and often successful start-ups, as well as a considerable amount of technology, know-how, and engineering talent to this high-tech cluster. Engineers working on semiconductors at UCLA drew on the resources offered by large defense corporations located in Southern California and established a major fabless firm, Broadcom, specializing in broadband microchips. Finally, the compound semiconductor specialists at UC Santa Barbara benefited from the presence of Hughes in the area. They later established innovative start-ups focusing on lasers and light-emitting diodes in their region and in Silicon Valley.

Biotechnology has emerged as a leading high–technology industry within the state of California. The origins and growth of biotechnology in California are strongly tied to the University of California (UC). This chapter examines the early history of biotechnology in the San Francisco and San Diego regions, exploring commercialization processes linking UC San Francisco and UC San Diego to an early company in each cluster, Genentech and Hybritech, respectively. The chapter argues that different patterns of university–industry relationships that emerged within these early firms affected the development of their respective biotechnology clusters, creating important differences in each region in both the dominant corporate strategies of biotechnology firms and the orientation of ties linking universities and firms.

4 Electrical Engineering and Computer Science at UC Berkeley and in the Silicon Valley: Modes of Regional Engagement
chapter abstract

This chapter uses a historical perspective to examine the relationships that the EE&CS program at UC Berkeley developed with firms in the region. The chapter demonstrates the complex and bidirectional interaction between UCB and regional firms. We demonstrate that people and ideas moved from industry to the university and vice versa. Industry researchers contributed to UCB in a variety of capacities including as instructors, professors, and graduate students took sabbaticals at firms, and students accepted positions in firms. Intellectual property circulated in both directions as industry researchers contributed ideas, software, and equipment to university projects and university researchers assisted firms. UC researchers were integral in forming a number of regional firms that commercialized their research results. There was little evidence that the formal channels of technology transfer such as patenting and licensing were significant in the interaction between university researchers and local firms.

Military contracts for advanced communications research fueled early wireless company development in the San Diego region. A serendipitous but crucial role was played by a young associate professor recently arrived at UCSD from MIT. Irwin Jacobs cofounded the consulting company Linkabit, which grew rapidly and seeded a regional wireless cluster after it was acquired. It also was the source of the core team that developed Qualcomm, one of the world's largest and most successful communications firms. This chapter documents the critical roles played by University Extension and the Division of Engineering in developing the advanced engineering skills needed by the regional wireless industry that relied on the newly developed CDMA technology. It also documents how a wide range of collaborative basic and applied research centers have developed over time between UCSD and the robust wireless cluster in the San Diego region.

6 University in a Garage: Instrumentation and Innovation in and around UC Santa Barbara
chapter abstract

Santa Barbara hosts several clusters of small high-tech firms, including in materials, software, environmental technologies, and nanotechnology instrumentation. This chapter traces the roots of the instrumentation cluster back to the financial and cultural crises afflicting many American research universities, including UCSB, in the 1970s. To maintain its graduate program, the UCSB Physics Department created a master's of scientific instrumentation degree, which brought in paying students who built experimental tools for faculty members. These master's students also provided personnel and expertise for a series of start-up companies founded by Virgil Elings and other faculty members associated with the master's program. Elings's most successful start-up, Digital Instruments, dominated the market in scanning probe microscopes, an important tool for nanoscience. Digital's merger with an East Coast company in 1999 then led many employees to form their own start-ups, giving rise to Santa Barbara's nanoinstrumentation cluster.

7 "We Are Both Hosts": Napa Valley, UC Davis, and the Search for Quality
chapter abstract

Scientists at UC Davis and Napa Valley winemakers have enjoyed a wide range of beneficial reciprocal interactions from the late 1940s through the present. This chapter examines four strands of the relationship: viticultural and enological research conducted in Napa by UC scientists that yielded improved practices; the importance of Davis's undergraduate and graduate instruction in providing trained winemakers and viticulturists; UC Cooperative Extension viticultural farm advisors, who helped transfer improved technology and practices, whether developed at Davis or elsewhere; and the continuing education offered to California winemakers by UC Davis Extension, which allowed them to upgrade their skills. The early and continued adoption of UC-based research and practice by UC-trained enologists and viticulturists, when combined with the Napa Valley's natural environment, has made Napa the best-known (and highest-priced) wine producing area in the United States and stimulated a regional economy based on grape and wine production.