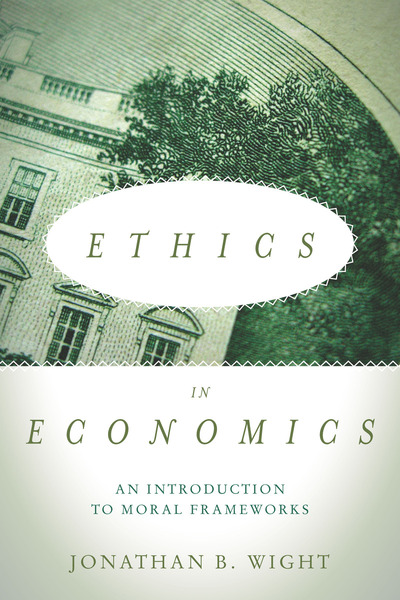 Ethics in Economics
An Introduction to Moral Frameworks
Jonathan B. Wight

Two ideas motivate the writing of this book. First, critical thinking is enhanced when economists understand how moral norms can help address potential market failure in the presence of moral hazards. If people in a variety of settings are motivated by principles other than satisfying their own preferences, exploring these behaviors can enhance the standard economic model. Second, economists regularly engage in public policy discussions using normative concepts like welfare and efficiency. Many are unaware that these practices involve a particular form of ethical analysis, one that has evolved in a controversial way. As a result, policy advice about economic efficiency becomes questionable in some settings.

If economics is to have validity, the nature of underlying institutional frameworks (including ethical norms) must be uncovered. Although many questions in economics are purely scientific, most policy analyses rely on a conscious or unconscious adoption of an ethical framework and related value judgments. This book intends to make those connections more visible and explicit. Exploring ethics in economics offers the hope of enhancing critical thinking and better preparing readers for a complex world.

Alfred Marshall, whose Principles of Economics textbook set the stage for twentieth-century economics, wrote this in the preface to the first edition:

. . . ethical forces are among those of which the economist has to take account. Attempts have indeed been made to construct an abstract science with regard to the actions of an “economic man,” who is under no ethical influences and who pursues pecuniary gain warily and energetically, but mechanically and selfishly. But they have not been successful.1

Marshall wrote those words in 1890, and in the next hundred years economists attempted to extricate ethical reasoning from the field. The “economic way of thinking” became purportedly purely scientific. George Stigler, who won the Nobel Prize in 1982, opined, “The basic role of the scientist in public policy, therefore, is that of establishing the costs and benefits of alternative institutional arrangements.”2 In this statement Stigler adopts a particular moral framework (that only consequences matter) and a particular moral value for evaluating consequences (dollar costs and benefits as a proxy for welfare). “Economics is finally at the threshold of its golden age,” Stigler wrote in 1965.3

Stigler’s pronouncement was prophetic, and the methods of economists soon overran the fields of political science and sociology and made significant inroads into law and other fields. But, in a larger sense, as economics spread to other subjects, the discipline also drew inward in terms of the questions, methods, and goals pursued. Modern economists became less active in liberal education because, unlike their forebears, they rarely examined, or debated, the moral foundations of their own activities.4

A liberal education requires stretching one’s critical thinking skills in ways that are only partially addressed by traditional methods in economics.5 Public policy problems cross disciplinary boundaries and raise substantial normative questions. Indeed, if economists maintain that they do not rely on ethics at all, this is troublesome. If efficiency is viewed simply as a “fact,” instead of as an evaluative construct, for which alternatives exist, it creates intellectual blinders for anyone doing public policy work. Implicit moral judgments in economics should be subject to scrutiny. We should unpack and examine the ethical framework that informs the standard economic approach and consider its alternatives.

Adam Smith, in the eighteenth-century Enlightenment, saw economics as a branch of moral philosophy. Over the last few decades, economists have again engaged in fruitful dialogue with philosophers. The result of ignoring these linkages, in the words of Nobel laureate Amartya Sen, is that “modern economics has been substantially impoverished by the distance that has grown between economics and ethics.”6 As Marshall predicted, the effort to eliminate ethics would fail. It failed because examining ethical frameworks enhances understanding and prediction, and it failed because policy analysis cannot be done in isolation from ethical choices. Hence, “a well-trained economist should be able to scrutinize the moral underpinnings of a policy statement.”7

Not all economists would agree. Some would no doubt insist that it is “folly” to suppose that “devotion to moral principles offers the solution of social problems.”8 This statement reveals a semantic problem. Morality in some contexts is conflated with subservience to religious dogmas or socialist ideals about altruism; experience shows that the resulting policies can produce horrific outcomes. Modern economics is a science that offers hope for progress and freedom. Standard economics is a powerful tool for both understanding and changing the world for the better. Yet economists cannot be blind to the possibility that looking beyond preference satisfaction and efficiency can offer coherent and rational arguments for enhancing the world also. Defining and explaining a pluralist approach to ethics is the first task. In the opinion of Sen, who pioneered the resurgence of interest in ethics in economics, “An economic analyst ultimately has to juggle many balls, even if a little clumsily, rather than giving a superb display of virtuosity with one little ball [for example, efficiency].”9

Part I defends the idea that ethical inquiry is an essential component of critical thinking in economics and identifies three commonly used approaches. Part II investigates the economic welfare model, which relies on a particular version of outcome-oriented ethics, and explores why it is both powerful and controversial. (Chapter 4 is a review of microeconomics and may be omitted by advanced readers.) Part III explores the ways in which market and political processes rely on more than just efficiency-based ethics. One conclusion is that economists should be careful about what we think we know, and even more careful in recommending policies, when the ethical analysis is narrowly focused or unexamined.

5. Liberal is used in its classical sense, not in a modern political meaning. See Jonathan B. Wight, “Moral Reasoning in Economics,” in David C. Colander and KimMarie McGoldrick, op. cit.