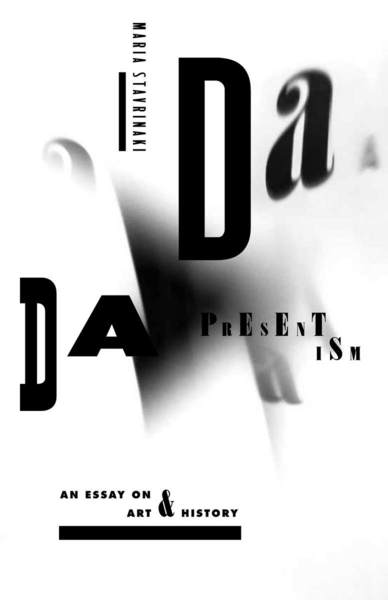 Dada Presentism
An Essay on Art and History
Maria Stavrinaki

The distance between the space of experience and the horizon of expectation has been stretched to its limit, to its breaking point, with the result that the production of historical time seems to be suspended. Perhaps this is what generates today’s sense of a permanent, elusive, and almost immobile present, which nevertheless attempts to create its own historical time.8
—François Hartog

Contemporary presentism’s quest to produce its own historical time is haunted by commemoration of the past, which is more ghostly than ever. This mournful, obsessive fear of the past is one of the major differences between today’s presentism and Dadaist presentism, which was highly festive in nature. Although the present, which rules absolutely, as Hartog writes, is obsessed with the duty to remember and a respect for heritage, Dadaist presentism revolted against any commemorative appropriation of a flawlessly coherent history. The two presentisms—the Dadaists’ and ours—correspond to two completely different “regimes of historicity.”9 The present defended by Dada—by its Berlin contingent at least—was a truly revolutionary time, a “time filled by the presence of the now [Jetztzeit],” to use Walter Benjamin’s expression; it was “a present which is not a transition, but in which time stands still and has come to a stop.”10 This present methodically deconstructed the historical, economic, and political method of capitalization instituted by German historicism; it did this through a series of precise formal mechanisms and an astonishing philosophical and political argument. As for our own dilated present, it is the expression of an age in which capitalism is hegemonic and revolution as a collective form for the suspension of time seems to belong to the annals of history.

No one knows if he will be hit by the wave created by the raging storm at the other end of the world. The nerve-wracking uncertainty is the grisliest tool of the time, a truly demonic device of the machine age. Death approaches and none can look it in the eye; courage in the old sense is in decline; but here and there heroism is blazing and cries its old song of defiance with which humanity has again and again wrested the justification of its being.11

This book is dedicated to the Dadaists’ heroic presentism in the face of a simultaneous world that spared none and a history whose infernal repetition took away human freedom. To the Dadaists, heroic appropriation of the present bore the ontological weight of a decision—the only intellectually and ethically worthy one. But precisely because their presentism involved a decision, it also promised an alternative, perhaps more credible, conception of the future.

Broadly, the Dadaists’ decision to seize the present came out of their rejection of both the historical past and a meliorist future whose exact symmetry was confirmed in the parallel ways they instrumentalized the present.12 “The Dada person recognizes no past which might tie him down,” Raoul Hausmann wrote. “He is held up by the living present, by his existence.”13 The Dadaists inherited their vitalist independence with respect to the historical past from the Expressionists. All the pictorial avant-gardes of the prewar era shared the view of history as a “burden,” which Hayden White identified more generally in early twentieth-century literature.14 This history, seen either as a mechanical accumulation of events succeeding one another in time or as a reservoir of fixed forms fashioned by the past and then erected into models, was violently rejected by artists in the name of their antimimetic stance toward life. Kurt Pinthus, man of letters and the author of an illuminating text on Expressionist temporalities, wrote in 1919 that the past “lies behind us untransformable, already.”15 And what this historicism was to the past, meliorism was to the future: the two presupposed the same reproductive and cumulative understanding of time. The past was the temporal aspect of a passive reality—an ontological, artistic, social, and political reality—that those enraged idealists, the Expressionists, wanted to combat so as to shape it according to the requirements of their spirit.

The heroic overtones of Expressionist idealism aside, the Dadaists did not disagree with the Expressionists’ rejection of a fossilized past. What distinguished the two movements was the way they correlated present and future. Whereas the Dadaists wanted to achieve self-possession in the here and now, even in the face of adversity, Expressionist artists were “enem[ies] of the present,” as Siegfried Kracauer put it in 1918.16 To an Expressionist like Pinthus, the present, the quintessence of alienated time (which the Impressionists were mad enough to have elevated into the sole subject of their art), was “a furtively receding nothing.”17 “Only the future is entirely our work,” he concluded, as though the only work the Expressionists were sure of having was the work they had not yet accomplished.18 This projection into an indefinite future was the modern, optimistic, and historically confident version of the famous Pascalian dictum, “We never live, but hope to live.”19

When it came to highlighting the historical legitimacy of their art and thereby the objectivity of their methods, Expressionist artists thus emphasized the fertility of their age, which they depicted as pregnant with the future. Expressionism had an intermediary temporal status that was explicitly expressed in its forms. As Jean-Claude Lebensztejn explained, the action of colors in Expressionist works was often dissociated from that of lines, and composition straddled abstraction and imitation. But it was above all the principle of dissonance or contrast that manifested Expressionism’s intermediary system, a system whose entire meaning was based on an apocalyptic temporality. If the unusual and thereby shocking relationships between colors and forms did harm to the spectator’s perception, it was so that it might later do good to his or her soul.

This belief in salvation through destruction translated, of course, into the spatial construction of the paintings, which, through the centrifugal tension that often organized them, signified the immanent destruction of inert matter through the creative force of subjectivity.20 “Today,” announced Franz Marc in 1912, “art is moving in a direction toward which our fathers would never even have dreamed. One stands before the new works as in a dream and hears the horsemen of the Apocalypse in the air. An artistic tension is felt all over Europe.”21 Wassily Kandinsky observed that in the two years separating the first and second editions of the Blaue Reiter Almanach (1912–1914), historical time noticeably contracted: “In the course of these two years we have come closer to the future.”22 This acceleration, which fits the mold of apocalyptic awaiting, whether properly religious or secularized,23 can be seen in many of Marc’s and Kandinsky’s works; the taut convexity of their compositions suggests imminent explosion, like an egg on the verge of hatching life (Figure 1). Kandinsky formulated this thesis in The Spiritual in Art without the slightest ambiguity: “Art [that] has no power for the future, which is only a child of the age and cannot become a mother of the future, is a barren art.”24

Whereas Expressionism’s vocation was to give birth to the future, Dadaist practices were defined as children of the present. As we will see, the Dada artists had a different view of genealogy and a different idea of the relationship between forebears and posterity, progenitors and descendants, artists and works. As the architect and adroit observer Ludwig Hilberseimer wrote, they believed that “the true work of art will always be born only from the chaos of time.”25 Within this chaos, the end of time existed side by side with new possibilities, but these were possibilities that began in the now, from a new time. The role of the artist was to forge practices that would reveal the profound ambiguity of the present. This is why such contradictory tactics as eclecticism and primitivism, parody and utopia, were all used in Dadaism as equally appropriate responses. For these artists the future was not to come; it had already arrived.

9. My reading here differs somewhat from Brigid Doherty’s in her “Work of Art.” The difference lies not so much in our interpretive aims as in our means of arriving at them. Through a meticulous close reading of Rainer Maria Rilke’s poem “Archaïscher Torso Apollos” (1908) and drawing on two Dadaists’ references to the poet, Doherty tries to read the Dadaist assemblage as a critical interpretation of this sonnet. Whereas Rilke’s sonnet is an elegy to the ancient world, which is able to shine through its fragments within interiority, the Dadaist assemblage renounces all hope that contemplation can be of any help, especially contemplation of the ancient world. Thus Doherty shows that what I refer to as the two Dadaists’ presentist conception depends on the past, albeit by negation. This elegiac posture seems more palpable to me in Baader’s work. As for Grosz and Heartfield, I would like to explore instead the way in which they weave together what I call the actualization of the past and their Marxist deconstruction of the plus-value of this past.

11. See von Leyden, “History.” On the idea of layered time and the importance of the particular in history as they were developed by some influential thinkers of the nineteenth century, see Loriga, Le petit x.

13. The expression is Siegfried Kracauer’s in his posthumous work on history, where he used it to designate the interpretation of the past according to historians’ conjectural interests. See Kracauer, History, 62–79.

17. This is the title of a 1911 painting by Marcel Duchamp. For more on it, see Duve, Pictorial Nominalism.

21. In “Introduction” Herzfelde presents Orientalism and all other forms of exoticism as amplified expressions of painting’s raison d’être: spatiotemporal transposition.