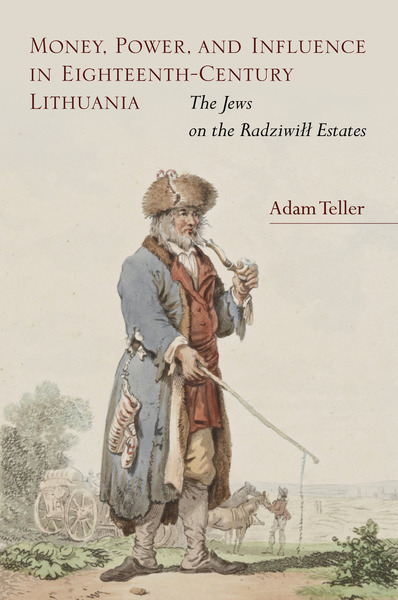 Money, Power, and Influence in Eighteenth-Century Lithuania
The Jews on the Radziwiłł Estates
Adam Teller

In the decade that has passed since my study of the Jews on the Radziwiłł estates was published in Hebrew in Jerusalem in 2005, a great deal has changed in the field of Jewish history, particularly in the English-speaking world—so much, in fact, that I became convinced that a revised English-language version of my book, updated to take the new trends into account, would have something fresh to contribute.*

The most significant of the changes is the reintroduction of economic history into the mainstream of Jewish historical research. This is in no small measure a reaction to the dominance in recent decades of the “cultural turn,” which has focused attention on representation (in particular, self-representation) and identity in the Jewish historical experience. While in no way negating the value of this approach, a group of scholars has come to feel that a grounding in the concrete realities of Jewish life is also of great importance for historical analysis. From there to the study of the economic activity that was a constitutive factor of Jewish society in every time and place has been but a small step.

I have witnessed this development with a great deal of satisfaction since this is the approach adopted by my own study. In it, I try to assess how the economic roles Jews played on noble-owned estates in the eighteenth-century Polish-Lithuanian Commonwealth led to their deep penetration of both the estate economy and the society around them. I go on to show how this development had a transformative effect on Eastern European Jews, reconstituting them as a group wielding significant economic power that could be leveraged into a much stronger position in society. Finally, I argue that, beyond shaping the internal relations of Jewish society, the phenomena discussed in the book had far-reaching implications for the history of Poland-Lithuania as a whole.

At the time I wrote the original study I felt somewhat isolated academically, rather like a voice in the wilderness. Very few scholars appreciated my claims that economic activity was a transformative force that empowered rather than marginalized Jews, that it was a crucial element in the growth of their communities rather than just a cause of hatred and violence, and that the development of the societies surrounding them cannot be understood without taking it into account. Today that is no longer the case. New publications in the field of Jewish economic history appear every year. Conferences, research groups, and academic discussions are now more common, and scholarly dialog flourishes. I have been privileged to take part in some of this activity.

Though the immediate audience for this work is the scholarly community of Jewish historians (by which I mean historians of the Jewish past), I trust that the book will have a great deal to say to other groups, too. Since the original Hebrew study was inaccessible to this broader audience, the publication of a revised version in English seemed to me all the more important. Knowing that the book, in its updated form, is open not just to Jewish historians but to economic historians and scholars of Polish history, too, gives me a great deal of satisfaction.

Economic historians will find here a new analysis of the late feudal economy in Poland-Lithuania that emphasizes not questions of production, as so many have done before, but the role of the markets in the agricultural economy. The focus on Jews is crucial for this analysis, because they not only dominated these markets but also helped shape them.

Important on its own terms, this analysis also has something to contribute to the extensive discussions on the rise of capitalism. It can do so by providing valuable comparative perspectives drawn, paradoxically enough, from an examination of a road not taken. The late feudal economy proved not to be viable in a Europe undergoing the beginnings of capitalist development. The story of the Polish-Lithuanian economy and its Jews, for all their efflorescence during the eighteenth century, is ultimately one of failure and as such is highly instructive.

Another audience for this study is the historians of Poland. Since the fall of communism—and even a little before that—Polish historiography has begun to acknowledge that Jews formed a part of Polish society from at least the High Middle Ages. Much of the scholarship treats them as a separate, largely self-contained element within Polish society and focuses on the relations that developed between the Christian majority and the Jews who lived in their midst. It has proved a highly fruitful perspective, enriching both Polish and Jewish historiography.

I here propose a different approach. Rather than viewing Jews as a distinct group that lived on its own terms and maintained a set of relations with the society around it, this study treats them as an integral part of eighteenth-century Poland-Lithuania. Thus, it shows that the Jews were defined not so much by their religious or cultural distinctiveness as by the ways in which they participated in economy and society. The Jews emerge from the analysis transformed from objects of Polish-Jewish relations into subjects of Polish history itself.

Such a point of departure raises the intriguing question of how the presence, activity, and socioeconomic relations of Jews in Poland-Lithuania influenced the society around them. As will become clear from this study, the Jews were by no means an isolated and marginal group in the Commonwealth. The roles they played in the economy were of fundamental importance in shaping not only the magnate families they served but the very development of the state.

In writing, revising, and then rewriting a book that makes such bold claims, I have benefitted from the help and advice of very many people. Foremost among these was my teacher, mentor, and eventually dear friend, the late Prof. Jacob Goldberg of the Hebrew University in Jerusalem. It was he who first introduced me to the issue of economic history, taught me the research skills I needed to pursue it, and encouraged me to learn the most up-to-date methodologies from specialists in the field. My intellectual and professional debt to him is enormous. Though he passed away a few years ago now, I continue to miss him.

Another senior colleague and now friend whose scholarship has deeply influenced me and whose support I have enjoyed for many years is Prof. Gershon Hundert of McGill University in Montréal. His work, which seamlessly integrates economic perspectives into a cultural history of Polish-Lithuanian Jewry, first opened my eyes to the broader perspectives that the study of economic history can bring. Prof. Israel Bartal of the Hebrew University has not only been a teacher, mentor, and friend, but has written a number of quite inspirational studies, providing newer and ever richer perspectives on the history of the Jews in Eastern Europe. Prof. Steve Zipperstein of Stanford University has supported both myself and this project staunchly for many years. It was he who encouraged me to embark on the translation and revision of the Hebrew monograph and his enthusiasm has played a very important role in getting the final version written and into print. I have benefitted from his generous help and advice on occasions too numerous to mention.

I owe a particular debt to Prof. Moshe Rosman of Bar-Ilan University in Ramat Gan. His 1990 study, The Lords’ Jews: Magnate-Jewish Relations in the Polish Lithuanian Commonwealth during the Eighteenth Century, opened the field of magnate-Jewish relations to detailed research. Though my study differs from his in approach, methodology, and conclusions, his work provided me with a crucial comparative perspective. Moreover, as I was doing the research for this book, I became aware that without his groundbreaking efforts I would have found it considerably more difficult to reach the conclusions I did.

The sources for the study were found largely in the Archiwum Główne Akt Dawnych in Warsaw, the Natsyial’ny histarychny arkhiŭ Belarusi in Minsk, the Central Archives for the History of the Jewish People in Jerusalem, and the National Library of Israel. The staffs of all these institutes were extremely friendly and helpful to me. My thanks to them all.

The research and publication of this study in its various forms was supported by Yad Hanadiv, the Memorial Foundation for Jewish Culture, the Planning and Budget Committee of the Council for Higher Education of Israel, the Center for the History and Culture of Polish Jews and the Mandel Institute for Jewish Studies, both at the Hebrew University of Jerusalem, the Gotteiner Institute for the History of the Bund and the Jewish Labor Movement and the Department of Jewish History at the University of Haifa, the Lucius N. Littauer Foundation in New York City, the Koret Foundation in San Francisco, and finally the Dean of Faculty and the Program in Judaic Studies at Brown University. I am very grateful.

I also wish to thank the staff of Stanford University Press.

I have enjoyed the support of my family throughout. My parents supported me financially and emotionally in difficult times, as did my brothers. I want to mention two particular debts of gratitude: one to my father, who has unselfishly put his considerable literary talents at my disposal by reading, critiquing, and editing almost every word I have ever written in English; the other, to my brother Richard, who has always been willing to give an extra helping hand in times of special need.

My three daughters, Osnat, Shira, and Na’ama, grew up as I was writing the original study. Their love and enthusiasm was always a beacon of light for me, pulling me back from the eighteenth century to the twentieth and twenty-first to help me remain sane and keep a smile in my eyes. My fourth daughter, Inbal, grew up during the revisions. Her very special brand of love has taught me a huge amount about fatherhood, and that is a treasure I shall always prize.

Above and beyond all these, I owe my life and my happiness to my soul mate, Rachel Rojanski. I remain constantly amazed at my good fortune in finding her and at the joy of sharing all my experiences, intellectual and mundane, with her. Words simply cannot express my love.