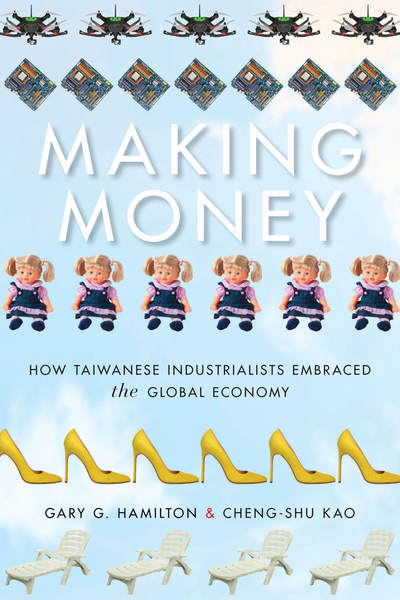 When the two of us first began our collaboration in the 1984–1985 academic year, we thought the secret of Taiwan’s industrialization was there in front of us, waiting to be discovered. Hamilton, a sociologist then located at the University of California, Davis, had gone to Taiwan on a Fulbright fellowship to teach and do research at Tunghai University, located in Taichung City, the third largest urban area in Taiwan. A member of the sociology faculty at Tunghai University, Kao was then Chair of the Graduate Institute of Sociology. A PhD graduate from Ohio State University, Kao was a specialist in sociological theory. He had spent a year in the mid-1970s in Germany working on a book about Jürgen Habermas and Max Weber. Hamilton also specialized in sociological theory, had taught it for many years, and thought of himself as working in the Weberian tradition.

Our initial friendship was founded on a common appreciation of Max Weber. Weber came to early fame with his book The Protestant Ethic and the “Spirit” of Capitalism (1904–1905), whose core thesis linked the sectarian ethic of Protestantism to the so-called spirit of capitalism. Weber spent the last fifteen years of his life trying to provide a compelling, comparative framework that would assess the veracity of this early work. The approach and many of the concepts that Weber used to build this conceptual framework remain important even today, and the two of us recognized the significance of Weber’s work in explaining Asian capitalism, even though we recognized that Weber made errors in his interpretation of China.1

By midyear of 1985, we had begun to meet every Friday afternoon for coffee to talk about how we might use Weber’s approach to advance an understanding of the rapid capitalist expansion then occurring in Asia and particularly in Taiwan. Gradually, the focus of our discussion shifted from theory to the reality of Taiwan’s situation and to the recognition that we needed more empirical knowledge about Taiwan before we could make pronouncements about Taiwan’s economic transformation. As the academic year came to a close, we vowed to begin a collaborative study of Asian capitalism, and to do so, we worked out a division of labor. Kao and his students would investigate Taiwan’s economy firsthand by means of interviews and fieldwork with businesspeople. Hamilton and his colleagues and students would add the comparative and historical framework that could be used to spell out the distinctive features of Taiwan’s economy in the context of other Asian economies. Little did we realize at the time that we would be starting a collaboration that would still be going strong over thirty years later.

In the past thirty years, the research center that Kao started, the Institute of East Asian Societies and Economies, has conducted in-depth interviews with owners and managers of more than 800 firms; most of these interviews have been transcribed. Kao and his students have visited some of these owners and managers numerous times, usually at intervals of several years.2 Every time Hamilton visited Taiwan, usually once or twice a year, it would be the occasion for additional interviews with some of the most revealing businesses. For his part, Hamilton and his colleagues at University of California, Davis, also started a research program, in the Institute of Government Affairs, to study the comparative and institutional features of Asian economies.3

Although this division of labor led to considerable research and many publications, we discovered that capitalism is an elusive topic. We learned that it is impossible to get capitalism to sit still long enough to locate a singular essence, its inner logic, or even to establish a set of fixed characteristics beyond the most general ones. Nonetheless, the results of this capitalist transformation are seen everywhere. The results are a part of most people’s everyday lives. Because this transformation is so elusive and yet so pervasive, we have come to think about capitalism in light of the Chinese saying “Rising winds, surging clouds” (feng qi yun yong). These four characters in combination signify turbulent times, an age of transformation. A way to interpret this phrase is that we see the wind by watching the clouds; we know a forceful movement is at hand by watching its turbulent effects.

The spread of capitalism has transformed Asia, and this transformation is very much like the rising winds and the surging clouds. Like the rising winds, capitalism is an invisible force; it is everywhere and at the same time it is very difficult to see and to grasp. We all only know capitalism by watching the swirling clouds, by recognizing its effects on people and their daily lives, on nations and their social and political institutions, on the globe and its changing climate. These effects of capitalism, the swirling clouds, are not the same as capitalism itself. To equate the two would be a mistake, but not to see the wind as the source of the swirl is equally a mistake. We know they are related, the wind and the clouds, but how they are related is unclear and changeable; a great many factors combine, in different ways and at different times, to create what we observe as the weather. It is equally so with capitalist currents in the global economy.

3. After moving to the University of Washington in 1993, Hamilton continued to collaborate with his colleagues at UC Davis.