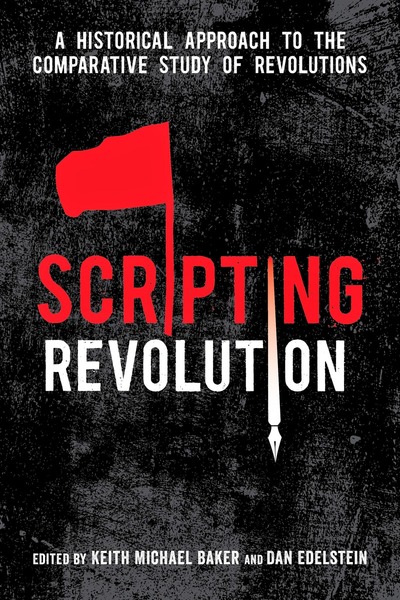 DAVID ARMITAGE is the Lloyd C. Blankfein Professor of History at Harvard University, where he teaches intellectual history and international history. Among his fourteen books to date are, as author, The Declaration of Independence: A Global History (2007), and Foundations of Modern International Thought (2013); as coauthor, The History Manifesto (2014); and, as coeditor, The Age of Revolutions in Global Context, c. 1760–1840 (2010) and Pacific Histories: Ocean, Land, People (2014).

KEITH MICHAEL BAKER is the J. E. Wallace Sterling Professor in the Humanities and Professor of Early Modern European History and (by courtesy) French at Stanford University. He received his M.A. from Cambridge University and his Ph.D. from University College, London. Before moving to Stanford, he taught for many years at the University of Chicago, where he served for almost a decade as coeditor of the Journal of Modern History. Baker has held a Guggenheim Fellowship, has been named Chevalier dans l’Ordre des Palmes Académiques, and is an elected member of the American Academy of Arts and Sciences and of the American Philosophical Society. He is a former President of the International Society for Eighteenth-Century Studies. His many publications include Condorcet: From Natural Philosophy to Social Mathematics (1975), and Inventing the French Revolution (1990).

DAVID A. BELL is Sidney and Ruth Lapidus Professor in the History of North Atlantic Revolutions at Princeton University, and the author, most recently, of The First Total War: Napoleon’s Europe and the Making of Warfare as We Know It (Boston, 2007).

JULIAN BOURG is Associate Professor and Core Moderator at Boston College. He received his Ph.D. from the University of California, Berkeley. His first book, From Revolution to Ethics, won the 2008 Morris D. Forkosch book prize from the Journal of the History of Ideas. He serves on the editorial board of Modern Intellectual History and is the past recipient of a Mellon Postdoctoral Fellowship in Interdisciplinary Studies at Washington University in St. Louis, a Fulbright Fellowship, and a Charlotte Newcombe Fellowship from the Woodrow Wilson Foundation. His continuing interests include French theory, especially the thought of Michel Foucault; the relationship between ethics and aesthetics; and twentieth-century French Catholic intellectuals.

DOMINICA CHANG is Associate Professor of French and Francophone Studies at Lawrence University. She earned a bachelor’s degree in French language and literature from University of Wisconsin-Madison, a master’s degree in French studies from Middlebury College, and a Ph.D. in Romance languages and literatures from the University of Michigan. Her research interests include nineteenth-century French studies, literary history and historiography, print culture, film studies, and language pedagogy.

DAVID COMO is Associate Professor of Early Modern British History at Stanford University. He received his Ph.D. from Princeton University, and is the author of Blown by the Spirit: Puritanism and the Emergence of an Antinomian Underground in pre-Civil-War England (Stanford, 2004). His research covers such topics as early modern British history, Puritanism, politics, the English Revolution, and the history of print.

ALEXANDER C. COOK is an Assistant Professor of History at the University of California, Berkeley. He received his Ph.D. from Columbia University and has previously held positions at Stanford University and Brown University. His research interests include cultural, intellectual, legal, and political history of twentieth-century China. His forthcoming book, The Cultural Revolution on Trial: Mao and the Gang of Four, is under contract with Cambridge University Press.

DAN EDELSTEIN is Professor of French and (by courtesy) History at Stanford University. He has published two books, The Terror of Natural Right: Republicanism, the Cult of Nature, and the French Revolution (2009), and The Enlightenment: A Genealogy (2010), both with the University of Chicago Press. His current research interests include natural law theory, the comparative study of revolutions, and digital humanities.

MALICK GHACHEM is an Associate Professor of History at the Massachusetts Institute of Technology and a Senior Scholar at the University of Maine School of Law. He holds undergraduate and law degrees from Harvard University and a Ph.D. in history from Stanford. He is the author of The Old Regime and the Haitian Revolution (Cambridge University Press, 2012) and numerous articles in the fields of French colonial and American legal history.

LILLIAN GUERRA is currently Associate Professor of Cuban and Caribbean History at the University of Florida, having previously taught at Bates College and Yale University. She received her Ph.D. from the University of Wisconsin-Madison, and is the author of three books, Popular Expression and National Identity in Puerto Rico (University of Florida Press, 1998), The Myth of José Martí: Conflicting Nationalisms in Early Twentieth-Century Cuba (University of North Carolina Press, 2005), and Visions of Power in Cuba: Revolution, Redemption and Resistance, 1959–1971 (University of North Carolina Press, 2012). She has also contributed chapters to many scholarly collections and published articles in journals such as The Hispanic American Historical Review, Social History, and Cuban Studies.

TIM HARRIS received his BA, MA, and Ph.D. from Cambridge University and was a Fellow of Emmanuel College from 1983 before moving to Brown University in 1986. A social historian of politics, he has written about the interface of high and low politics, popular protest movements, ideology and propaganda, party politics, popular culture, and the politics of religious dissent during Britain’s Age of Revolutions. He edits the book series Studies in Early Modern Cultural, Political and Social History for Boydell Press and is on the editorial board of the journal The European Legacy.

GUILLAUME MAZEAU is a lecturer in modern history at the Université Paris 1 Panthéon-Sorbonne. He is a member of the Institut d’Histoire de la Révolution française and a member of the editorial board of the Annales historiques de la Révolution française. He is the author of Corday contre Marat. Les discordes de l’histoire (Corday against Marat: The Discords of History) (Artlys, 2009), and Pour quoi faire la Révolution (The Revolution, What For?) (Agony, 2012, in collaboration with Jean-Luc Chappey, Bernard Gainot, Frederick Regent, and Pierre Serna). His work focuses on the history of collective mobilization and violence, as well as practices and visual culture in times of revolution.

ABBAS MILANI is the Hamid and Christina Moghadam Director of Iranian Studies at Stanford University and a Professor (by courtesy) in the Division of International, Comparative, and Area Studies. His expertise is in United States–Iran relations and Iranian cultural, political, and security issues. He previously taught at Tehran University’s Faculty of Law and Political Science, where he was also a member of the Board of Directors of the University’s Center for International Relations. He also served as the Chair of the Political Science Department at the Notre Dame de Namur University, and has been a Research Fellow at the University of California, Berkeley’s Middle East Center and the Hoover Institution at Stanford.

JACK RAKOVE is the William Robertson Coe Professor of History and American Studies and Professor of Political Science and (by courtesy) Law at Stanford University, where he has taught since 1980. His principal areas of research include the origins of the American Revolution and Constitution, the political practice and theory of James Madison, and the role of historical knowledge in constitutional litigation. He is the author of six books, including Original Meanings: Politics and Ideas in the Making of the Constitution (1996), which won the Pulitzer Prize in History, and Revolutionaries: A New History of the Invention of America (2010), which was a finalist for the George Washington Prize. He is a member of the American Academy of Arts and Sciences, the American Philosophical Society, and a past president of the Society for the History of the Early American Republic.

GARETH STEDMAN JONES is Professor of the History of Ideas at Queen Mary, University of London. He received a BA from Lincoln College, Oxford, and a D.Phil. from Nuffield College, Oxford. He has been Director of the Centre for History and Economics at Cambridge since 2001, as well as Professor of Political Science and History, Cambridge University, where he is also a Fellow of King’s College, and was an Alexander von Humboldt Stiftung Fellow at the Goethe University, Frankfurt. His publications include the books An End to Poverty? (Columbia University Press, 2005), Languages of Class: Studies in English Working Class History, 1832–1982 (Cambridge, 1983), Outcast London (Oxford, 1971), and Religion and the Political Imagination (coedited with Ira Katznelson, Cambridge, 2010). His research interests include Modern European political thought; political, intellectual and economic history of Europe from the time of the French Revolution; and Victorian London.

IAN D. THATCHER is Professor in History and Head of the School of English and History at the University of Ulster, Coleraine. From 2012 to 2014 he was Research Director at the Helsinki Collegium for Advanced Studies, University of Helsinki. A graduate of the then Institute of Soviet and East European Studies, University of Glasgow, he has published widely on the Russian Revolution and on Russia from the late imperial period to the collapse of communism.

SILVANA TOSKA is a doctoral candidate in international relations and comparative politics in the Department of Government at Cornell University. She is currently a visiting scholar at Harvard University. Prior to starting the doctoral program, Silvana did graduate work at Georgetown and Oxford universities in Arab and African studies. She works on the spread of revolutions, revolution and war, and gender.

CLAUDIA VERHOEVEN is Associate Professor in the History Department at Cornell University. She received her Ph.D. in 2004 from UCLA and was Assistant Professor of Modern European history at George Mason University from 2006 to 2009. She is the author of The Odd Man Karakozov: Imperial Russia, Modernity, and the Birth of Terrorism (Cornell University Press, 2009), and has more recently published a series of chapters and articles examining terrorism’s temporality. She is also the coeditor of The Oxford Handbook of the History of Terrorism and “Cultures of Radicalization: Discourses and Practices of Political Violence and Terrorism,” a special issue of the Social Science History Journal.

JEFFREY WASSERSTROM is Professor of Chinese History at the University of California, Irvine. He received his Ph.D. from the University of California, Berkeley. His books include Student Protests in Twentieth-Century China: The View from Shanghai (Stanford, 1991), and China in the 21st Century: What Everyone Needs to Know (Oxford, 2010). He is a Fellow of the Asia Society, the Editor of the Journal of Asian Studies, and the Asia Editor of the Los Angeles Review of Books. He is also a regular contributor to a wide range of general-interest periodicals, including the New York Times, the Wall Street Journal, and The Times Literary Supplement (London).

YIDI WU is a history Ph.D. candidate at the University of California, Irvine. Her interests include student activism and social movements in modern Chinese history. Her dissertation focuses on Chinese students’ reactions between the Hundred Flowers and the Anti-Rightist Campaigns of 1957. She has coauthored with Jeffrey Wasserstrom an annotated bibliography of the 1989 People’s Movement for the Oxford Bibliographies, and her chapter on the Yan’an Rectification Campaign is part of a 1943 book project, edited by Joseph Esherick and Matthew Combs, to be published by Cornell University Press.