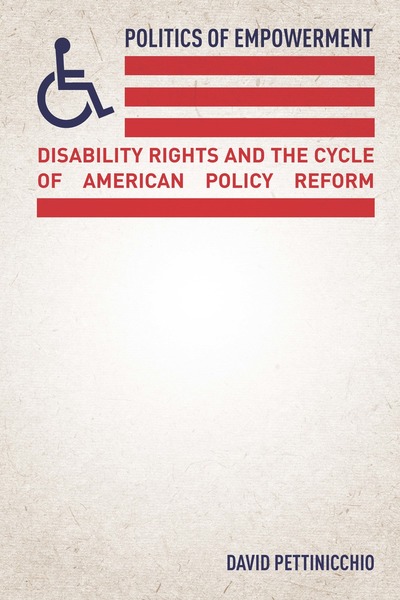 IT WAS AN EXCEPTIONALLY BEAUTIFUL sunny Seattle December morning in 2012. I was packing up my Capitol Hill apartment, soon to be temporarily back in Montreal before heading off to the University of Oxford. I was reminded by a television news report that the Senate had just failed to ratify the UN Convention on Disability Rights. The convention’s language was in effect modeled after the Americans with Disabilities Act (ADA), the so-called emancipation proclamation for people with disabilities. This seemed to fly in the face of the research I had been conducting on the United States as a world leader in disability policy—a fact that did not slip the notice of my academic mentors. But as this book developed over the years, it became clearer to me that this political or policy failure, in fact, was not at all an ironic aberration in American policy making, political institutions, or the political process.

This book, which draws on disability politics and policy making, tells a broader story about the way government lunges forward in producing policy innovations that empower citizens, only to incrementally back-step—a “death by a thousand cuts”—to borrow from liberal Republican and disability rights advocate Lowell Weicker. Indeed, the ADA, a civil rights law second in notoriety perhaps only to the Civil Rights Act itself, was an attempt to restore civil rights enacted years earlier. And it too had to be “restored” eighteen years later with the ADA Amendments Act.

In 2017—more than a quarter century after the ADA was enacted—attempts to roll back rights through, for instance, the ADA Education and Reform Act, were accompanied by efforts to strengthen existing legislation. The Disability Integration Act of 2017, for example, introduced by a man who was no stranger to the disability rights cause, James Sensenbrenner, sought to meet unfulfilled expectations by the ADA in regard to the right to community-based care. In 2018, Democratic senators Bob Casey and Amy Klobuchar (among others) introduced two new bills seeking to bolster the ADA, especially as it relates to undermining economic inequality: the Disability Employment Incentive Act and the Office of Disability Policy Act.

This cyclical nature in US policy making reveals that American political institutions can produce remarkable periods of innovation, but they just as easily allow for devolution, then renewed attempts at restoration, and so on. My book makes a compelling (and troubling) point that something so fundamental as civil rights can remain unsettled despite more than a half century of policy making around the issue.

But much in the way threats of retrenchment during the Reagan years mobilized the disability community, current threats are doing the same. As a 2018 Time article so appropriately put it, “Donald Trump inadvertently sparked a new disability rights movement.”1 Longtime activists and long-established disability advocacy groups like ADAPT (Americans Disabled for Attendant Programs Today, formerly Americans Disabled for Accessible Public Transit) have been joined by a new generation of politically savvy disability activists, which may very well constitute a “third wave” of activism protecting and potentially strengthening civil rights for Americans with disabilities.

One cannot fully appreciate where we are today on disability rights without considering the century-old disability policy legacy of incremental shifts within the disability policy domain, punctuated by bursts of creativity within government, the advocacy explosion in the disability voluntary sector, and the rise of disruptive collective action that continues to challenge the state to do what disability rights entrepreneurs intended it to do fifty years ago: to treat citizens with disabilities like any other minority or disadvantaged group entitled to their civil rights.

One of my key objectives in writing the book is to show, within this political context, when, where, and how social movement mobilization and citizen participation matter in promoting and protecting policies meant to improve citizens’ lives by guaranteeing basic rights and eliminating inequalities. Activists and organizational leaders are part of a broader social-change field that also includes political elites, institutional activists, and political entrepreneurs working to shape the policy agenda. This is important because policies change how constituencies interact with the state.

The coevolution of institutional contexts and social movements reveals a great deal about how activists and groups recognize and respond to political opportunities to effect change. Organizational advocacy and disruptive action at times supplemented efforts by elite political entrepreneurs and, at other times, supplanted them altogether in an ongoing struggle to firmly incorporate disability rights into American institutions, organizations, and culture.