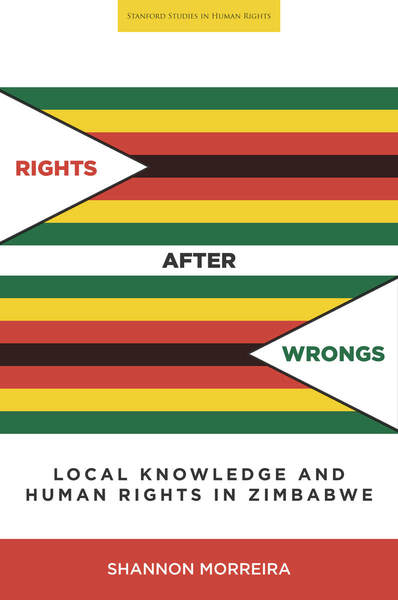 Contents
Excerpt from the Introduction
Foreword

Shannon Morreira's Rights After Wrongs: Local Knowledge and Human Rights in Zimbabwe is a profound mediation on the ways in which multiple entanglements complicate even the most critical theories of human rights as a pervasive mode of contemporary world making and world representing. These include Morreira’s own entanglements as an anthropologist, social advocate, and a member of the “first postindependence urban generation of Zimbabweans,” someone who finds herself among the Zimbabwean diaspora in South Africa. Throughout the book, Morreira draws on this complicated situationality to argue for an approach to understanding the practice of human rights that extends concepts like vernacularization and localization to apprehend what she describes as the “sites of rich polyvalence and cultural ingenuity” at which Zimbabweans come to terms with state violence, economic decline, and chronic hopelessness.

As Morreira’s ethnography demonstrates, there is a certain recursivity to the way in which global and transnational human rights discourses get appropriated within specific social, political, and legal processes at specific moments that make up the Oakeshottian “world of present experience.” In her analysis, it is important to draw distinctions among the abstract universalist claims (and pretentions) of human rights, the equally abstract assumptions about how these claims should be adopted in practice, and how they are, in fact, actually adopted. It is this last step with which Morreira’s study is largely concerned, that is, what might be thought of as the actually existing practice of human rights beyond abstractions of all kinds. Nevertheless, as she points out, these real practices of human rights are never completely separate from the abstractions that to a large extent prefigure them. As Morreira’s research on the prevalence of “rights talk” in Zimbabwe reveals, the boundaries of human right ideology form limits to the extent to which the connotative power of human rights discourse can be pushed.

At the same time, Morreira’s study of the practices of human rights in Zimbabwe is deeply embedded in the broader arc of history through which Zimbabwe emerged quite late from its contested and violent colonial past with a postcolonial euphoria that by the early 1990s had disappeared in the face of internal political repression and the macroeconomic impact of external International Monetary Fund structural adjustment policies. As she acknowledges, her study unfolded long after Zimbabwe’s manifold problems had become markers for a kind of postcolonial trajectory that was on its way to total state failure. These were challenging conditions indeed in which to track the potential of human rights discourse in a country in which independence from a colonial regime did not mean the transition from despair to possibility but rather, as Morreira puts it (quoting Stuart Hall), the “passage from one [set of] historical power configurations or conjunctures to another.”

The fraught relationship between postcolonial disenchantment and the utopian limits of human rights discourse is perhaps no better illustrated than in Morreira’s discussion of the debates leading up the writing and passage of a new constitution in Zimbabwe in 2013. Although this new social contract was meant to “shine like chrome, as captivating as beads,” as a promotional guide put it, in fact, as Morreira discovered, what resulted was the product of a complicated process of normative laundering through which the entrenched “power configurations” of the ruling party were legitimated in the language of democracy, freedom, and empowerment.

And yet, despite the sobering sense of restraint that runs through Morreira’s study, she concludes on a note of possibility. For as she argues, human rights discourse is never the only resource for people trying to craft meaning and purpose in the face of violence and suffering. As her research among the Tree of Life movement showed, it was important to keep in mind that human rights were “drawn in . . . as a single set of possibilities amongst many” because even though the language of human rights had become conflated with state power, “it is not possible to shut down all alternative ways of knowing and being in the world.”