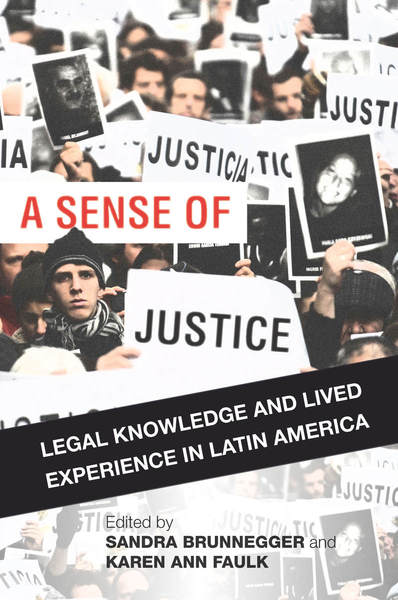 The introduction explores the meaning(s) of justice, and sets out the range of perspectives adopted by contributors in discussing justice as these are (re)produced by diverse actors. It offers an overarching rationale for focusing on the construction of authoritative legal knowledge(s) and formation of participants' legal subjectivities within the spaces of interaction with local, national, and international regimes of justice and rights, arguing that the production of legal subjectivities and of authoritative knowledges are intertwined and fundamental in understanding the complex ways in which justice is defined and practiced in Latin America today. The authors propose an anthropology of justice, where grounded explorations of concepts of justice in practice reveal that these concepts are neither limited to nor fully encompassed by the 'justice' that law can provide.

This chapter focuses on Colombia, specifically at how legal narratives are selectively appropriated in debates over the rights of victims of conflict-related violence. Defining victim's rights has been a process fraught with tension and manipulated for political ends. Vera Lugo focuses on how state agencies and grassroots movements draw on codified narratives of transitional justice – what it is, who it is for, and how it is meant to operate – in defining and legitimizing their goals. The chapter also pays careful attention to the role of memory in localizing notions of justice. Vera Lugo explores how memory, the performance of memory, and legal frameworks are utilized by grassroots movements and by the state in articulating localized claims as to what constitutes the limit and scope of legitimate rights.

This chapter explores the history of activism surrounding the 1994 bombing of a Jewish community center (AMIA) in Buenos Aires, Argentina. It argues that while each of the four original factions within this body of activism share basic fundamental principles over what constitutes justice, the relative ranking that they assign each priority directs their understanding of appropriate and necessary action, or how "justice" can and should be achieved. How activists, participants, and their allies position themselves in relation to one another and to the state, community, and international institutions to which they make their appeals also reveals a multiplicity of ways within which authoritative knowledge about the attacks and the investigations that followed it is constructed, debated, and accepted or rejected. The chapter demonstrates how the difficulty in achieving a sense of closure following dramatic and tragic events of this type is directly related to these debates over authoritative knowledge.

Graham Denyer Willis provides a detailed and grounded ethnographic account of the tensions inherent in the Brazilian police institutions. Using examples from the day-to-day functioning of Brazilian police operations, Willis's chapter explores the 'trans-legal' space of discretionary police activity and social relations that can span the state, politics, and criminal actors. By exploring these trans-legal spaces, Willis is able to access why a discourse of human and citizens' rights fails to resonate with Brazilian police workers, for whom ideas of 'justice' are deeply impacted by the challenges of inadequate pay and lack of protection from the violence they are meant to control.

This chapter gives an account of disparate and even contradictory ideas about the Argentine Supreme Court's workings and judicial practice that play out among different legal experts within the juridical field. By pointing out the relationship between the subjects' conceptualizations, experiences, and perceptions of justice and their positions vis-à-vis the judicial apparatus, Barrera advances the notion of judicial practice as a spatialized phenomenon. The subjects immersion in a web of authoritative legal knowledge and legal and judicial practices highlights the spatialized character of their practices and their process of legal-knowledge production, even though they can be critical of those processes. The chapter examines the role of nostalgia, and suggests that disparate individual and institutional knowledges and practices may compete to create and shape the judicial body.

This chapter focuses on two Permanent Peoples' Tribunal (PPT) pre-hearings and the TPP process in Colombia. Brunnegger shows how these hearings, designed to poll popular opinion on the actions of transnational corporations on legally recognized indigenous land, can also be read as generative sites of knowledge practices of storytelling and testimony. Brunnegger focuses on the legitimacy-creating dynamics at play in the hearing's legally framed pursuit of justice. By serving as spaces for expressing and mobilizing the pain and outrage that corporate incursions into their land has provoked, these hearings allowed participants to assert alternative forms of knowledge and to establish networks in which these knowledges and senses of belonging are negotiated, legitimized and reinforced. This chapter shows how knowledge turns into a fictitious commodity capable of creating and reproducing a network of social relations around the (legal) acknowledgment of wrongdoing.

6 On Justice, Insecurity, and the Right to the City in Brazil's Oldest Metropolis
chapter abstract

This chapter explores the way in which ideas about insecurity have come to modulate public discourse on justice and citizenship in Salvador, inflecting the experience of life in the city and the values that underpin residents' image of a good citizen. This chapter is set within a context in which Brazilian federal law has incorporated the "right to the city" and sought to create the conditions for the development of a more egalitarian and 'just' form of urban citizenship. The chapter argues that through the Bahian state government's attempt to implement these changes, a democratic ideal of citizenship becomes subordinated to perverse political rationalities of security, in which categories like vulnerability, victimhood, even the right to life itself end up hollowing out the periphery's sense of justice and willingness to seek change.

7 Water Justice, Mining, and the Fetish Form of Law in the Atacama Desert
chapter abstract

This chapter focuses on competing meanings of 'water justice' in the Chilean Atacama Desert. The Chilean government has described the country's 'manifest destiny' as lying with the exploitation of its natural resources through mining. Atacama Desert peoples, however, call on distinctively Andean repertoires of ideas about ownership and justice, which allow them to defend their oases by challenging the official form of Chilean property law. Barros's chapter focuses on how the social life of water amongst Atacama Desert peoples and the mining, media, and political elites of Chile, forms a plural yet uneven interlegal field in which the large-scale plunder and commodification of the commons is sporadically contested. The chapter offers a legal ethnography of the State and its extractive elite as they work to deepen the colonial nature/culture divides through racialized strategies that drain off Atacameño water and threaten to undermine the collective basis of inhabitants' subjectivity.

Conclusion: Justice at the Limits of Law
chapter abstract

Goodale's conclusion pulls together threads from throughout the volume, interrogating the complicated imaginaries of justice in Latin America and the ways in which legal knowledge is imagined, valued, and legitimized. In considering the role –or non-role- of justice in the Bolivian constitution and the effects of current processes whereby emancipatory impulses and movements are judicialized, the chapter points to different kinds of productive tensions between the strictures and structures of law and "justice". Goodale argues for a recognition of a dual formation in the anthropology of justice: the move to unpack and understand the multiplicity of justice as an ethnographic and social category; and, the move to penetrate the level of interpretive analysis—which often becomes part of claims-making itself—in order to unmask the relations of production that often lie at the heart of social conflict and chronic immiseration.